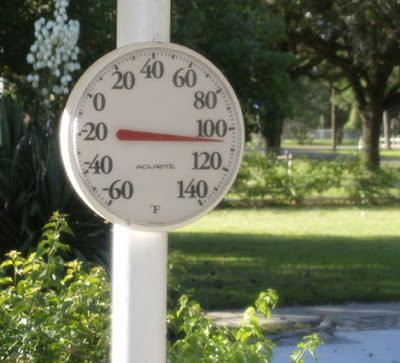 No, not that hot! Really!
Although the picture above was taken today, and is NOT "retouched" or altered in Photoshop, it wasn't really that hot in Victoria.

I took this at about 8:00 this morning when the low sun was still hitting the back of the thermometer. Normally it's in the shade; or at least during the heat of the day. The temp was really only in the low 80s when I took this shot.

But hey, it FELT that hot later in the afternoon when we were out on the golf course!

Anyway, it reminded me of a classic poem which (ahem) I wrote a couple of years ago during a Texas heat wave. Since some of you may have forgotten it, or others may not have seen it, in complete humility (guffaw!) I will now reprise it for your reading pleasure.

The sun is hot as blazes. It’s summer here, for sure.
The air felt like a furnace blast when I walked out the door.
I’ve put this off for far too long, I need to mow the grass.
The neighbors look and shake their heads, sure that I’m low-class.

The grass and weeds are climbing high, obscuring now the house.
I see the yards on either side, and feel just like a louse.
The folks around here keep their lawns all manicured and neat.
Makes my place look abandoned, it’s the worst lot on this street.

All week the sun’s been shining, hot, since Monday’s heavy rains.
I would have (should have) mowed on Thursday, if I’d had the brains.
On Thursday after work the air was cooler with some breeze,
But now I see no movement in the branches on the trees.

I mount my trusty mower—(at least I get to sit!
I used to push a walk-behind, until it finally quit.
But then we bought the riding kind, much better when it’s hot.
‘Cause, after all, my house sits on a two-thirds-acre lot!)

With sweat already trickling down I move to the attack,
I wonder; should I start out in the front, or in the back?
The trees out front provide more shade; I think I’ll start out there.
A wimp, you say? Well, maybe so, but that’s not really fair.

I mean, it REALLY HOT out here, the grass is really high.
In fact, I’m not sure where I am; can hardly see the sky.
I’d started out across the lawn; by now I should have crossed it.
I wonder if I’m riding round in circles. Have I lost it?

It’s getting dark. I wonder if we’re going to have a storm.
The air seems full of smoke and dust, this surely ain’t the norm.
I smell a smell like rotten eggs, but keep the mower mowing.
I’ve GOT to reach the street out front if I just keep on going.

Ah wait! What’s that? I think I see a figure just ahead.
Looks like a man. But why’s he dressed from head to toe in red?
Could it be Santa Claus, the elf, the jolly Christmas giver?
But then I noticed horns and tail! I realized (with a shiver,)

That this could be none other than Beelzebub, old Ned!
I wondered if, in all this heat, I’d passed out and was dead!
But surely I’d not be in Hell! By Jesus I’ve been saved!
Just then the devil turned to me. He stared and then he raved.

“I wanted a vacation from my home down under ground.
I’d heard that up in Texas, many pleasures could be found.
But here I am, and all I find is weather just like there.
I wanted someplace cooler, and this just isn’t fair!

“It’s only May in Texas, and the summer ain’t till June!
That’s why I didn’t come up later; why I came so soon.
I thought it would be diff’rent, but as only I can tell,
I’m going back right now because it’s hotter here than Hell!”

A clap of thunder shook the ground. The devil disappeared.
The sun was out, the smoke was gone. T’was not, as I had feared,
The end of Earth, the end of me; but rather the finale
Of a Saturday night nightmare! T’was morning—time to rally!

I looked outside and saw the grass was only inches high.
The sun shone pale through morning mist, low in the eastern sky.
I didn’t read the forecast or the almanac to see,
For I knew on good authority just how hot it would be!
Posted by Duke_of_Earle at 4:58 PM

I was wondering if you were going to run that one again. Good one!

Great poem, JOhn. I was in "Hotter Than Hell" yesterday, otherwise known as Pinehurst, NC (Golf Heaven). We were setting up for a garden party on the lawn (one of the Jim Valvano Gala events) and I almost passed out.

I think we all find out the hard way, that thermometers can't be put on a column like that.

I used to live in a turn of the century craftsman with the big tapered wood columns. I thought they were fat enough to use. But the thermometers still never worked right on it. I moved the thermometer to the wall and presto, it was always on the money. Too bad I couldn't see it from inside the house.

Talk about HOT, it's so hot here I could have fried an egg on the roof of my car this afternoon. I'm SO sick of it. Bring on the winter!!!!

When I first posted that poem I also introduced (to little fanfare) a new measure of the effects of temperature and humidity. We're all familiar, of course, with the "heat index?" I created the "Hades Index." Expressed as a decimal, it's the ratio of how hot it feels outside compared to the temperature in Hell.

I even submitted this clever creation to my local newspaper, but they failed to recognize the obvious merit. I'm sure they would have, except for the efforts of the local Chamber of Commerce to quash anything that might reflect negatively on this fair community.

Actually that thermometer IS "right on"from about 8:30 am through the rest of the day, or any time the sun is behind a cloud. And as you point out, there is a definite advantage to being able to SEE the darned thing.

Can I nominate you Poet Laureate of the blogosphere. We obviously have better taste than a local newsrag.

That's why some folks are looking into xeriscaping these days - growing native plants instead of wasting water keeping a lawn green. Plus, you don't have to mow!

Here was my response to your poem in May 2005...have we been blogging that long?

Yes it was hot, almost up to one hundred!
Without any wind...not even a breeze
And since it was May I wasn't quite used to
The high humidity and elevated degrees

So how is it possible that I could remain
Relaxed, refreshed and ever so cool?
Because as I looked at the brash sun above me
I was flat on my back, floating 'round in my pool.

I lounged and I swam and I splashed there all day
Drinking wine coolers and acting all flirty
Of course I didn't burn--I am smarter than that!
Rubbing my body with SPF Thirty

What about the grass? How did it get mowed?
I wouldn't be caught dead doing anything like that!
The fact is I sleep with the yard man quite often
He trims the front bushes and also pets my cat.

The pool is high maintenance to keep crystal clear
So how do I manage without going in debt?
I also bed the pool man on a regular basis
He makes everything so deliciously wet!

You might think my poetry has turned a bit dirty
With sexual innuendo running rampantly HOT
The fact is the yard- and the pool-man's my husband
Keeping everything spiffy. But a cat? There is not...

The poem is still as good as ever John, but your thermometer cheats.

John, this to respond to your P.S. of your recent comment om my "Dark Cloud" post, chapter 4 of "Cups" has been posted HERE. To keep continuity, each new chapter will be posted on Fridays. I've really been "bitten" by this story. I originally pictured it as a three-parter - now, I can't say. I keep thinking up new twists. Part 5 is well underway.

I remember that poem well, John. JUst think every year when you are in the middle of a heat wave, you can re-reprise it.

if you think thats hot where I went on holiday in Scotland on one day it got so hot that I actually took of my jumper and woolly hat !!!