A friend of mine was working on a note the other day. He asked me for some "word advice." Well, what else could I say? I told him, "Sure thing! I'm your man." But then I had to cringe. He said he needed help to find a word to rhyme with "orange."

"Well, gee," I told him with a shrug. "That's harder than you think. Though many English words have rhymes (some perfect, some that stink), there are SOME words that have no rhymes—not even on the fringe. And one of those un-rhyming words is your colorful 'orange.'"

He sneered at me and said, "That's bunk! Here. . . take the color 'purple.' In 'Dang Me,' Roger Miller made it rhyme with 'maple surple.' If he could do that (and it worked!), then surely you could 'arrange' — to put together simple sounds and make them rhyme with 'orange!'"

I told him, "Look, it can't be done. Wise men have tried for years... to rhyme that word with anything that won't offend the ears. I don't know why you want it, but unless it's something grungy, you won't like words I mispronounce to make them sound 'orange-y!'"

"Well, thanks a LOT! I'm outta here." He waved me a dismissal. I think he'd just been smoking weed that smelled like burning sisal. I wondered if some other drugs, those taken with a syringe, might now be fueling his desire to find a rhyme for "orange."

In French, now, it would work. You see, they place the accent later. It's on the second syllable, not on the first (like "TA-ter"). So if you think of "duck l'orange" (a tasty dish I picture!) "l'orange" becomes a perfect rhyme with "mélange" (meaning "mixture").

In English if you place the accent on the second vowel, and say the word with emphasis from deep within your bowel, (for emphasis is everything, and on it all this hinges), you'll wind up with a word that rhymes. Just try it! Say, "o-RINGE-s." 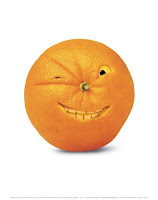 (Artwork courtesy of Karyn Lyndon. Thanks, Karyn!)
Posted by Duke_of_Earle at 6:30 PM

Did you really have a friend who wanted rhymes for orange?
Or did this tale pour out your head like warm and mushy porridge?
Or was this by some famous poet who'd drank too much caffeine?
I'd simply tell your friend to change the orange to tangerine.

Who can say where random thoughts come from?

I was just driving to work on Wednesday morning and happened to think that I'd once heard about no English word rhyming with orange or purple. My two remaining active (sometimes -- Carol often claims that one or both have become dormant) brain cells started vibrating in sync, and all those not-really-rhyming-but-kinda-close words started floating around in the "warm and mushy porridge" you mentioned.

"Purple" brought to mind the old Roger Miller song. But I was particularly proud of the stanza about the French words.

In that case my writerly hat is off to you. Pure genius!
(And I agree with you about the French part.)

BTW, I had a feeling it was a Earl original when you quoted Roger Miller.

I am such an idiot - the first time I started reading this, i didn't even realize it was in rhyme. I was reading it like prose. And wondering why you were phrasing so oddly. Somewhere in the second verse (paragraph) i figured out what was going on. Then LMAO at the poem and myself!

Obviously I read it before I saw the comment you left on my blog.

THANK you! That was my intention (to have people start reading it as prose, and then figure out later that it was supposed to rhyme). But you're the only one so far who has admitted to being suckered in.

Yes you got me too and then when I noticed the rhyme I started reading all over again. You are so gooooood.

Same here... had to read it twice! Then read it again, just for fun!