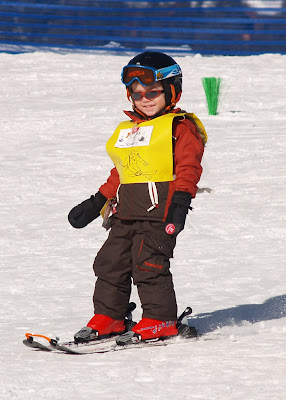 Then those instructors had better be quick!
Posted by Duke_of_Earle at 5:30 PM

He's adorably cute, and I am SO glad to see he has on a helmet, considering what just happened to Natasha.

Kenju, OH yeah! As you can imagine, helmets are absolutely required for all kids during lessons. And AFTER his lessons he'll be wearing a helmet also. Just ask his Mom, my daughter Christina, about her OWN need for a helmet this year. (Maybe she'll put in a comment. Remember daughter, I've got pictures!)

If you have pictures, don't we need to see them? LOL

Kenju, The pictures of her little "incident" are not very graphic. By the time I got the camera out she was back on her feet and fortunately not injured TOO badly. Coulda been a LOT worse. I'm hoping she'll see this and tell the story in her own words, either here or on her own blog (which I will then provide a link to!) :)

His smile is contagious. As soon as I saw the picture, I was smiling, too.

I think I mentioned my little "incident" on my blog once already. Didn't tell a detailed story, so if you feel the need to, go for it.