Birds on our golf course yesterday

Yes, carol was busy between shots and STILL managed to shoot an 84.

I was NOT busy between shots and managed to shoot quite a bit higher than 84.

Clearly I need a hobby to occupy my mind between golf shots. Or something. A new swing, and a modicum of talent might help.

The robin below was watching my first shot from the tee as it sailed right and out of bounds... 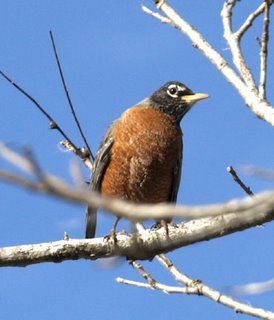 Then it watched my SECOND tee shot heading out-of-bounds to the left. 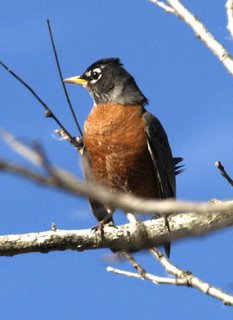 Then this same robin expressed its opinion of my golf skill (below) by mooning me! 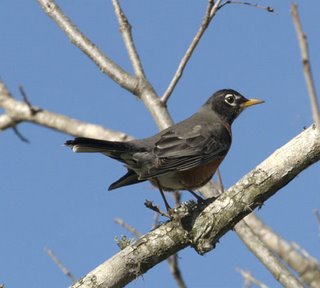 Obnoxious bird! But instead of FLIPPING it a bird of my own (as I was SO tempted to do), I merely invoked a curse upon it, saying, "May the bluebird of happiness drop a bomb on you as it flies over!"

Then, to my surprise, the said bluebird appeared. 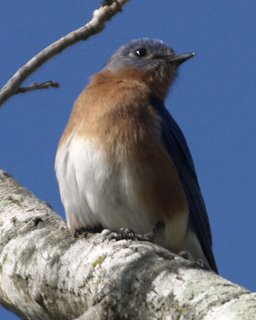 It eyed me. Then it eyed the robin.

Just when I thought it might obey my curse, it turned around and mooned me! I was REALLY beginning to feel like Rodney Dangerfield! 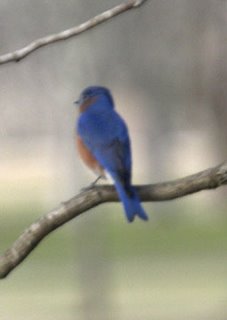 The snowy egret (below) was trying to catch a fish for dinner when my NEXT errant shot landed beside it in the water hazard. It quickly departed for Carol's side of the fairway, feeling much safer there. 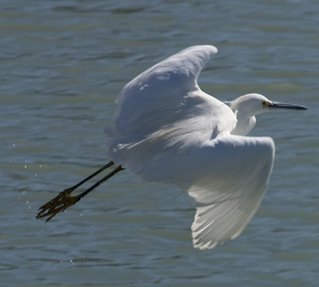 A kingbird stopped briefly to watch the action, but soon departed when my next shot bounced off the trunk of the tree it was sitting in. 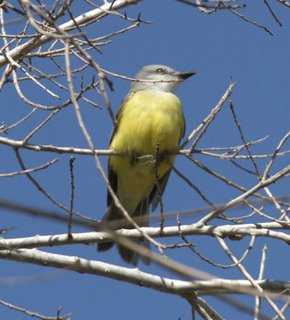 Determined to get at least ONE birdie, I went for the green in two on a par five, skulled the ball along the ground, and JUST ABOUT got my birdie (killing a robin on the ground). The robin ducked, formed an evil expression on its face, flew up to me, landed on my golf bag, cocked its head, looked me right in the eye and said...

No, this is a family blog. I won't tell you what it said. But this is what it LOOKED like. 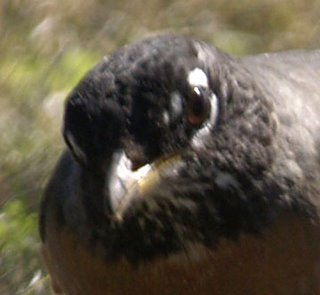 I like all the bird shots, John. DO tell us what he said?

great pics Duke, these robins and bluebirds though look nothing like robins or bluebirds. That robin looks massive compared to his British cousin, the ones we get are tiny.

Yes, DO tell us what he said. We're grownups and can handle fowl language.

All right ladies. You asked for it.

He said (as best I remember), "Look, buster, it's obvious you weren't trying to hit me, or you wouldn't have come close. I've watched your pathetic attempts to hit toward a target, so I'll cut you some slack.

"But if you pull a stunt like that one more time when I'm around, I'll shove that 5-iron right up your a**!"

Nasty creature! But I wasn't afraid of a little bird-brain like him, so I told him, "Buzz off, worm-breath."

He promptly pooped on my golf bag and flew away.

Hi John - sorry I have not been around of late but am not coping with the extra work at the moment. Back is much better though.

I loved this post and it was just what I needed to urge a hearty laugh from my belly.

Hi John, the birds in your area seem to have a pretty good grasp on the GAME? of golf.

That's a very WORDY robin, John!
LOL I'd stay away from him if I were you. Thanks for the visit today.

Hey, that bluebird looks just like the one that nests in my yard every Spring :-)