Interview with a squirrel (with an attitude)

(The four-legged variety of squirrel, that is.) 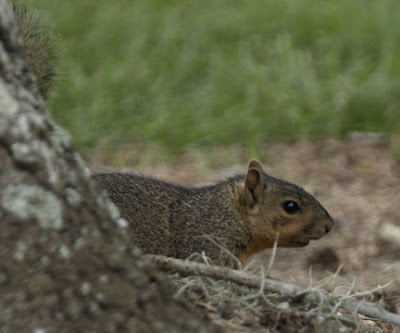 Romantic Ramblings: Hello! Excuse me, Mr. Squirrel... Do you have time to answer a few questions? 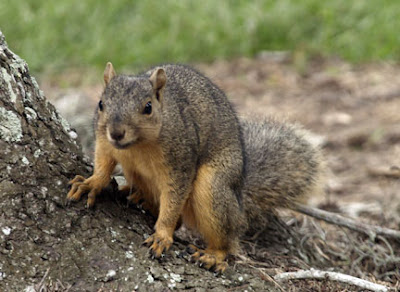 Squirrel (Speaking very fast in a squeaky voice): What? You talkin’ to ME? A few questions? Yeah, I know all about your questions. But have you got time for my answers? That’s what I want to know! 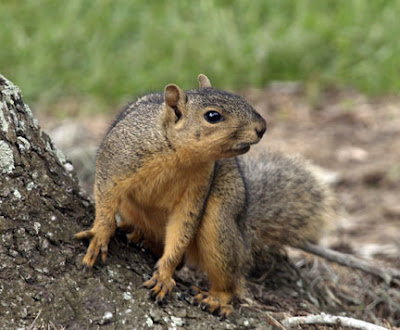 I mean, I saw you talking to that big white bird over there, and takin’ his pictures and all. He thinks he’s pretty special, doesn’t he? He’s always got his big nose way up in the air, on the end of that long neck of his. 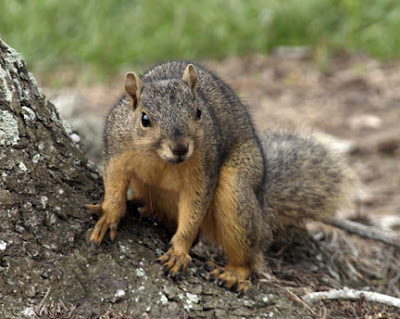 And I heard all that crap about his imitations of angels and airplanes and stuff. Ha! Birds always think they’re so high and mighty. A bunch of bird-brains, I say. And they can’t do half the things somebody like ME can do.

Anyway, I can do better stuff than THAT! I mean, come on! He doesn’t even have any teeth. If you gave him a nut, do you think he could eat it? No way!

Oh, sure, he can catch little fish and eat them, but who would want to? Then he takes off, tucks that long neck in tight, and flaps off like he’s so proud of himself. 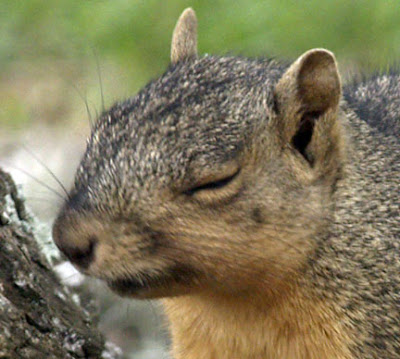 And he calls himself a “GREAT Egret!” Oh, bro-THER! 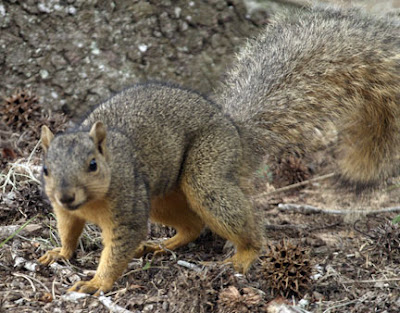 Now, you wanna talk about nimble? We squirrels are nimble! We can climb like no other creature on earth. 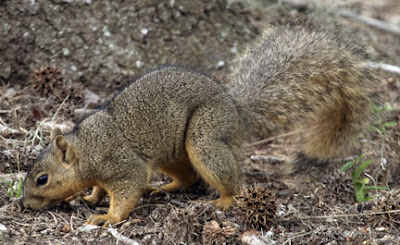 And we’re smart! We hide the nuts we don’t need right away by burying them in the ground. And then, later, we find them by smelling them out. Do you think a big bird could do that?

RR: Why thank you for all that information. But I’d like to ask you some questions— 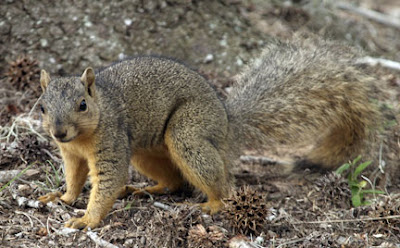 Squirrel: HEY! Don’t interrupt! It’s rude, dude! Now, as I was saying . . . What WAS I saying, anyway? You derailed my train of thought. 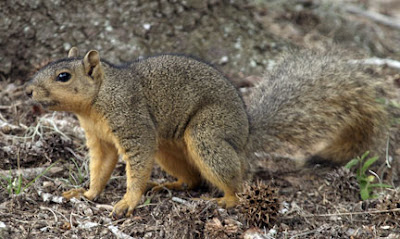 Oh, yeah, I remember. Sometimes we leave those nuts buried a long time, and you know what happens? They sprout and become trees! We plant more trees than all you humans ever thought about planting.

You’re so proud of Johnny Appleseed. Ha! He was a piker compared to us! 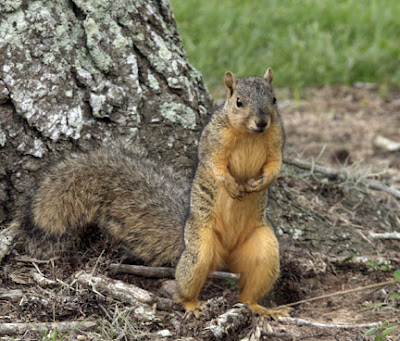 And if I ever catch one of you big people cutting DOWN any of those trees I plant... Well, I’ll just punch him in the mouth!

I’m real strong for my size! You want a piece of me, buster? Huh? DO you? 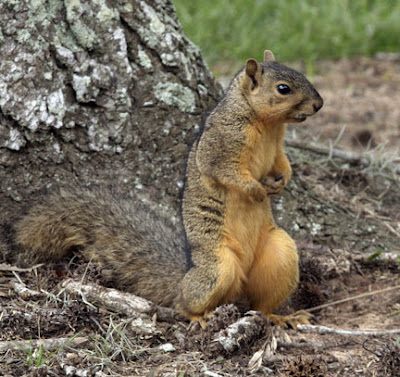 Oh, yeah, and you talk about balance. You humans think you’re so great because you stand up on two legs. Well, you’re not the ONLY ones who can do that! 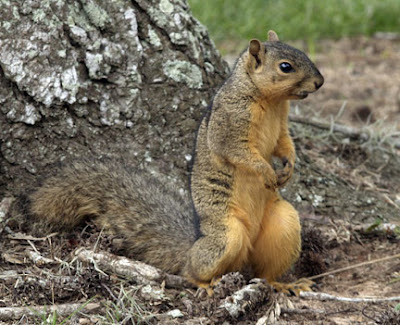 Heck, I could stand here all day if I wanted to! 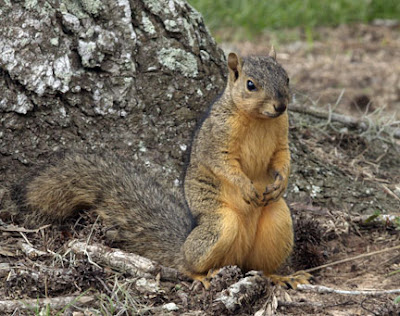 Oh, yeah, and getting back to that big white bird. You kept gushing about all the control he had, and his “feather definition.” B-i-g DEAL! 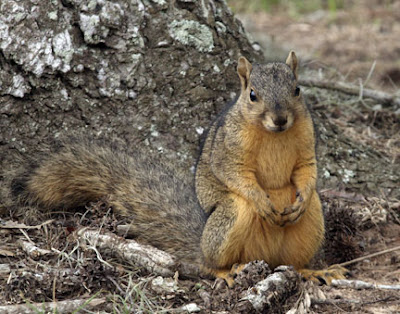 Have you seen what we squirrels can do with our tails? We can fluff them out, or make them look thin. 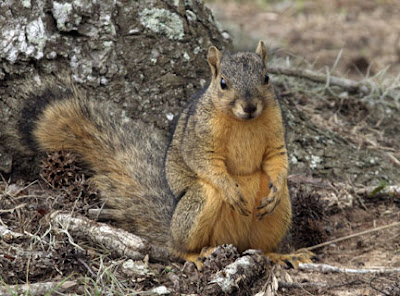 And if, say, a mockingbird (now THERE’s a REALLY stupid bird. You know those mockingbirds; all they do is fly and hop around and make noise. LOTS of noise! And they never have anything original to say, they’re just saying what the other birds say. Whatever they hear, they repeat. Dumb, really dumb!)

Anyway, like I was tellin' ya, if a mockingbird tries to dive-bomb me I can fluff out my tail and hold it over my back and head so he can’t peck me! Even when I run for cover! I’d like to see that egret cover himself with HIS little tail! 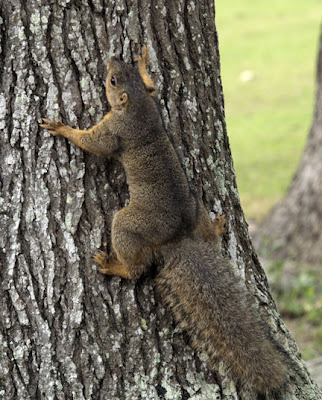 And speaking of running for cover, did you know I can go from flat on the ground to the top of this tree in about 15 seconds? And I can run around the trunk with my head up, or down, or sideways – makes no difference. 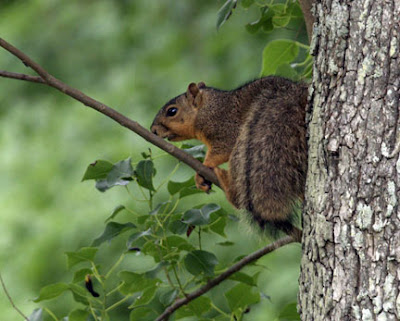 I can even cling to a tiny little branch like this. 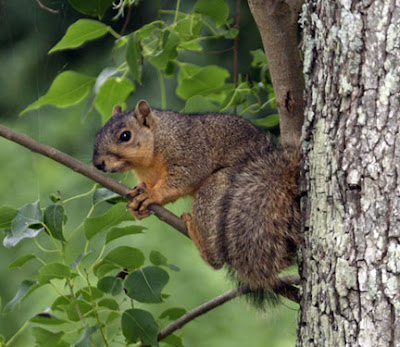 See? No problem! I can just wrap my fingers around and hold on. 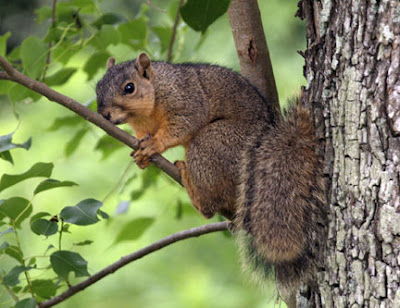 So you see? There’s no way a hawk can catch me—or a cat or weasel or anything else—as long as there’s a tree around. 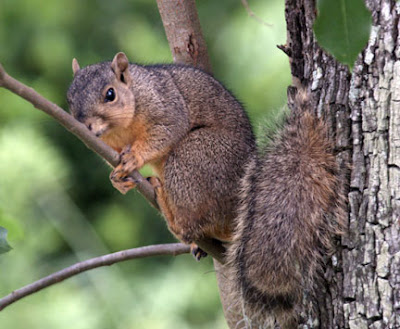 So, anyway, I hope that’s answered all your questions because I’m pretty busy right now and haven’t got time to just hang out and chit-chat, y’know? 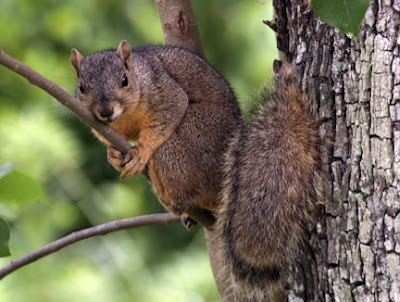 I mean, YOU may have time to cruise around and talk to those stupid birds, but I’VE got things to do. So, later gator, and all that. 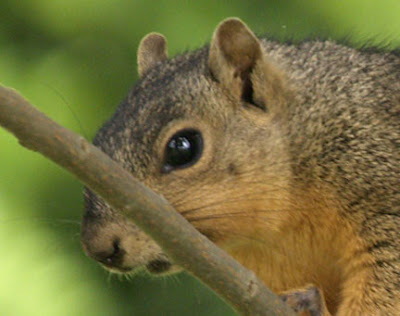 Squirrel: Hey, buster! Chill out! What part of “I’M BUSY” don’t you understand?

You know what those ads for Radio Shack say... “You’ve got questions—we’ve got answers?” So go call a Radio Shack!

(Scurries up the tree and out of sight.)

How rude he is! You'd think he would be much nicer, seeing as how you're giving him a forum and publicity and all! He's pretty cute, John, and I'm sure your photos do him justice!

Great photos. What kind of camera was used, if I may ask?

You are fast becoming the David Attenborough of the blog world John, great photos once again.

Thanks all, but I should have made it clear that all the photos here are CAROL'S shots. She's the perfectionist and the photographer of the family.

Steve, about 18 months ago we bought an Olympus E-500 SLR digital camera kit with two lenses. We've since added an even longer zoom lens (out to 300 mm) to give Carol the ability to zoom in and get those close-ups.

This little guy just stood and sat there in front of that tree posing for the longest time! I'm sure he wasn't really thinking those rude thoughts. . . Or was he?

John, Carol has convinced me that my next digital will be a SLR. Please convey my appreciation of her work.

I love watching the squirrls playing in our front yard. And yes, they are pretty cheeky.

OMG that was hilarious. You and Carol should seriously consider publishing a book together. Seriously dude.