As you saw in my last post, my poor old commute-to-work car met its demise in a close encounter with Bambi’s mom. One of you (Kenju) asked what I would be driving to work now.

The short-term answer was that I used a borrowed vehicle. Fortunately for us, Carol’s mother lives nearby, doesn’t drive any more, but has a Honda minivan. Periodically she asks me to drive it to work and back just to keep it in running condition. She was happy (she said) to let me use it for a few months until the car I had ordered last June was delivered.

What had I ordered that took so long? Well, I knew that my old Mazda (12 years old with 195,000 miles on it) wouldn’t last too many more years (months?), and I had begun lusting after the 2009 Ford Escape hybrid. It is Ford’s small SUV with better gas mileage than my little 4-cylinder, 5-speed Mazda, but with lots of room and hauling capacity. Seemed like a great compromise when gas was over $4 per gallon!

So, on the first day the ‘09 models could be ordered, I ordered one. That was June 4. They told me it would be October at the earliest before the car was ready; and more likely January! Well, okay. My Mazda was still running. I didn’t NEED a new car yet. January would be acceptable. You know, Merry Christmas and all!

What made the ’09 model more attractive than the ’08 was that the newer one came with stability control features lacking before. There were some other nice features, but that was the main reason.

Anyway, last Friday, October 31 (Halloween! Spooky, no?), I got a call at work from the Ford dealer.

My new car was in!

Since I know you’re just DYING to see it, here it is. Yesterday morning I sat in the car reading the manuals and trying to figure out all the features, hybrid charactaristics and nuances, while Carol walked around it snapping photos: 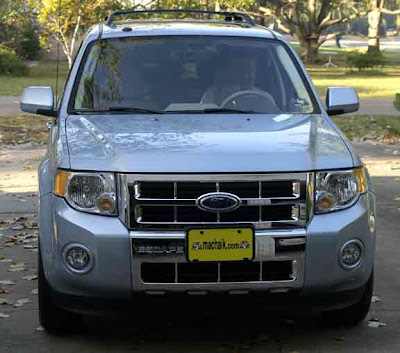 For you in the harsher climes, yes I live in South Texas. Yes, this shot was taken on November 1. Yes, it's still "late summer" here (we played golf yesterday with bright sunshine, temps in the mid 80s, and sweated in our shorts and short-sleeve shirts!) 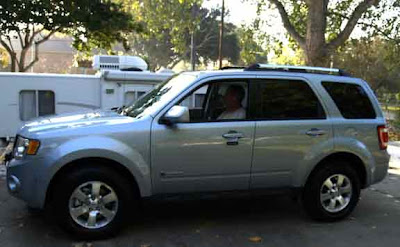 Ford calls this color "light ice-blue metallic." It looks almost silver in these shots because I lightened them up a bit for detail. The first picture (up above this one) is pretty close to the real color, on my monitor at least. 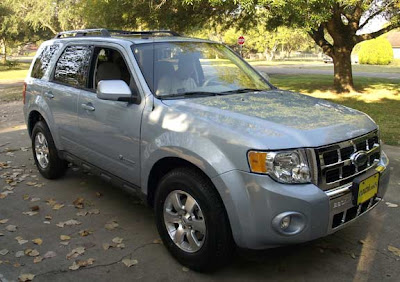 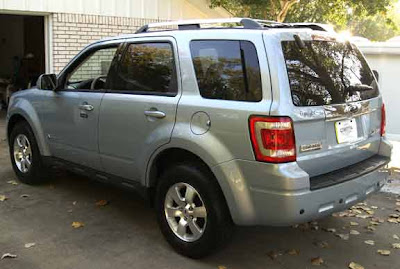 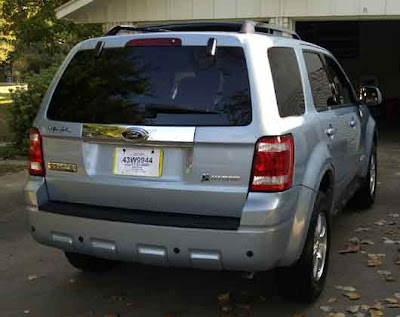 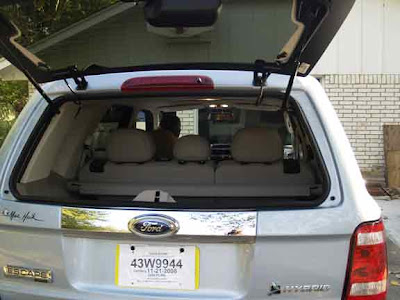 I have another story to tell about my first driving experience in this car, but that will wait for another post.

Thanks for the mention and for answering my question. That's a pretty color. My first minivan was nearly that color. I've seen those on the road here, and they look nice. I hope you'll be happy with her!!

And THANKS for following!

VERY nice!!! I hope it turns out to be a good reliable car.