When our children were little, Carol and I tried hard to maintain the myth that we, their parents, were perfect. We wanted them to perceive us as infallible guides to right, wrong, and general wisdom. There was nothing we didn’t know, and nothing we couldn’t do.

Of course, that lasted until they were about 6 months old. Being bright kids, they quickly perceived that we didn’t always agree, and thus one of us (their Mom) might be perfect, but the other one (me) fell far short of that standard.

Later, in an effort to help them learn from my earlier mistakes and thus avoid repeating those same mistakes themselves, I told stories of lessons I had learned, well... the hard way.

Thus was born what became a favorite pastime, especially when we were driving long distances (anything over a couple of miles). Inevitably one of them (Christina usually) would demand, “Daddy, tell us about some of the dumb things you used to do.”

That resulted in a very large number of tales, most of which Christina could probably tell you today given her excellent memory for stories. (Darn it.) But one in particular seemed to tickle them sufficiently that it was retold a number of times.

It was about the time I became an Olympic champion at the manly sport of toilet paper unrolling.

Yes, you read that correctly. That particular sport was never accepted by the IOC to be included in either the summer or winter games (it truly is an activity for all seasons), probably due to the difficulty in finding a suitable venue. But the fact is, I reigned as champion for a time.

Perhaps my 15 minutes of fame came when I was 17 years old. But before you laugh TOO loudly, how many of YOU have ever been featured in an article in a nationwide weekly news magazine? Huh? How many?

What? You doubt my word on this? Well then, unbeliever, take a look at THIS: 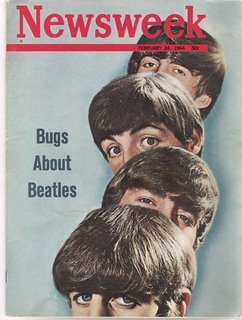 In case you can't read the date on the cover, it is February 24, 1964. This issue became known later as the famous "Beatles Issue," for obvous reasons. More on that tomorrow.

Yes, this is all part of a bigger story than you think. But not so terribly big.

Keep reading. You'll enjoy it. You're just about to get to one of the good parts.

Toward the back of this particular issue (page 88, to be exact) you'll find a short article entitled "Silly Season."

In case you don't believe me, below is a scan of page 88: 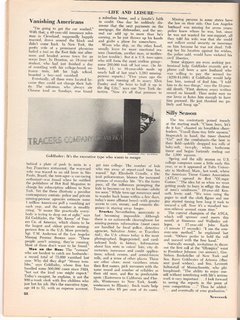 If you can't read the print (who can?!), click the picture of the page to see a larger version. Or, click HERE for a large print copy. (I hope the link works for you. It works on my machine using Internet Explorer. You'll probably have to click the little button that pops up labelled "Expand to regular size.")

Yes, that’s me they’re writing about on page 88. And yes, we really held competitions, several of which were coeducational. (Heck, it seemed like a great way to meet girls with a sense of humor.)

This was a sport in which the women could excel just as easily as the men. Size and strength were much less important than smooth, flowing motions and a consistent soft touch.

We were even successful in convincing Scott Paper Company to donate three huge cases of single-ply institutional grade toilet paper to our Association for competitions.

This was but one of the many stories told by Dad to his daughters about the “dumb things” he’d done. At the time I told them, they asked to see the magazine. I admitted I hadn’t saved any copies of it, but they could look it up in a library. They were both very disappointed in me for not saving a copy for posterity.

I told them, “Let that be the lesson you learn from all this! If you ever get written up in a newspaper or magazine, save a copy!”

Yeah, we all did stupid things in college (all of us normal people anyway) but how many of ur got written up in a national news magazine for it? I'm sure some ended up on the police blotter, but that's not exactly the same thing. My hat's off to you dad - you always were my biggest role model(who'da thunk it?).

In this day and age, I wonder if they'd send you anything free. Or at the very least, make you sign a waiver releasing them of any harm in any function associated with said association.

I couldn't get the print large enough to read - but I sure wish I could. I have lots of stupid stories from the past too, but I would tell my kids about them...lol

You're right, of course. The legal department would get involved and prevent that donation without all kinds of documents to "protect" them. I think we were just really lucky to get hold of a salesman who thought what we were doing was funny and he offered us the 3 free cases on his own. Probably got fired -- who knows?

I've emailed you a bigger copy of the article. If anyone else can't expand it in Internet Explorer and lets me know, I'll send them a big copy too.

I couldnt help but giggle. I remember the stories my dad told me when i was growing up. And even the ones he still tells us. Only most were about how he fished and hunted when he was a kid. Seemed my dad was a lil outlaw back then. He has certainly changed from what he "once was" ..