As many of you regulars know, I have a grandson who just celebrated his first birthday.

I have to say that I have exercised GREAT restraint in terms of posting baby pictures on this blog for all of you to Oooo and Ahhh over. I’m sure you’ll agree. Oh, there were a few. And I had a bunch posted on the web from our ski trip with a link to them from this blog, but that’s not the same.

Well, today is no different. I am NOT posting a picture of Trevor. But I HAVE to show you what Carol has done.

First, some background. Trevor isn’t talking yet, but his parents have noticed that he just loves the Geico Gecko. Whenever it comes on television, Trevor just smiles and cackles. He even recognizes its voice. One day he wasn’t looking at the screen when the commercial came on. The gecko started speaking in its Aussie accent, and Trevor stopped what he was doing and whipped his head around to see, then he started laughing.

So, given that, Carol went to the Geico web site and found a picture of the gecko lounging on top of the word “GEICO.” Using Adobe Photoshop she replaced the word “GEICO” with “TREVOR,” and...

Well here, let me show you. 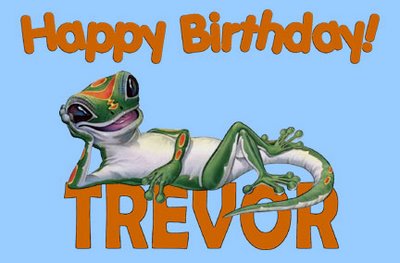 And then, the inside of the card: 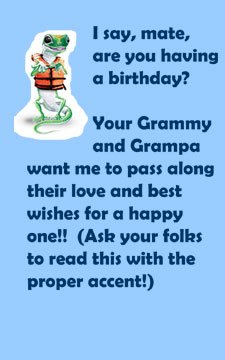 And of course, in true Grandma fashion, Carol ALSO printed an iron-on image of the gecko lounging on the word "Trevor" (as shown above) and transferred it to the front of a tee shirt.

According to a report from Trevor's parents, THEIR favorite gift for him was the tee shirt. However, in true one-year-old fashion, HIS favorite gift (the one he played with the most) was...

You have an amazing wife. She is talented, creative and is good at absolutely everything. The card is amazing.

Wow. That's pretty good. Carol is talented. I would not have CLUE how to do that. And isn't it just like a little kid to love the wrapping paper best! Gak!

Tell Carol I think she is wonderful, and Trevor is astute. I also love the gecko commercials.

Wow, what a thoughtful thing to do!

By the way, I absolutely INSIST that you post at least one pic of Trev for all of us to see! Being around 1 he must be SO unbelieveably cute! (I know 'cos the Bubby is 8 months today and he's the most gorgeous child in the history of history).

Awwww! This post brought a lump to my throat.

Very heartfelt post. And happy birthday to your grandbaby. :-)