Tagged for a drabble?

Here’s the deal: Write a drabble, which is (who knew?) a story containing exactly 100 words. It does not have to be a poem.

Candace tagged me. (So did Badabing, for something else, but that’s next—Candace got to me first.)

Gee, that’s a challenge! Wordy as I am, 100 words would barely get me through a good introductory sentence. But I figure if I can write a poem about words that rhyme with “orange,” why not a drabble?

So here goes. I didn't include the title in the word count. If the "rules" require its inclusion, I can adjust.
Oh, yeah. I almost forgot. I tag Karyn Lyndon! Haven't heard much from her lately.
(Ahem . . .)
Lightspeed x 23
Ion thrusters locked at emergency maximum, both racers willed their starships onward—at stake: survival. The approaching outpost held fuel for only one.

Jaorg came alert. Vibration? No moving drive system parts; so how…? Interstellar gases? Dust? But, the route was cleared!

The ship lurched. Parts rattled; flew. No! NO! “GAEL—!” His scream was cut short as his world disintegrated.

Malevor’s vessel streaked past the vapor that had been Jaorg, decelerated, and fueled. He smirked, and entered coordinates for home. Gaella would soon be his!
Posted by Duke_of_Earle at 2:02 PM 4 comments: 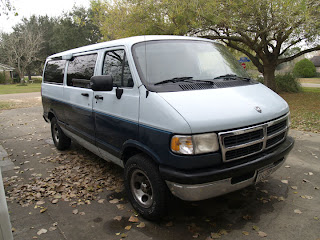 For me and Carol, at least.

In 1983 we bought a brand new Dodge full-size 3/4 ton van. My employer of that time had a smaller one (1/2 ton) that I liked, and I was particularly taken with the feature that both bench seats behind the front captain's chairs could be popped in and out without tools.

So what, you ask? Well, this gave me a large vehicle with lots of optional configurations to accomplish LOTS of tasks. 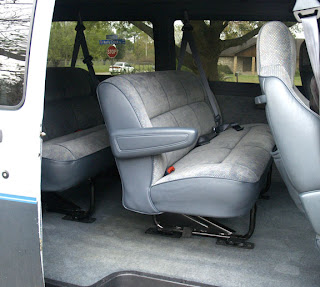 With all seats in, I could (and did) haul my kids' entire school volleyball or basketball teams to out-of town games. Even with all those passengers, I still had plenty of room for all their gear.

The van was our SUV at a time before SUVs were invented. No, it didn't have 4-wheel drive, but with high ground clearance it could go just about anywhere and do anything. On family vacations we would turn the bench seats so that they faced each other. Our girls could stretch out and sleep on individual "beds." Or they could sit opposite each other, put a piece of cardboard on their knees, and play board games.

With both bench seats removed (easily done) we hauled 4 X 8 sheets of plywood or drywall. We moved several rooms of furniture at a time. The volume of that boxy interior was simply amazing. 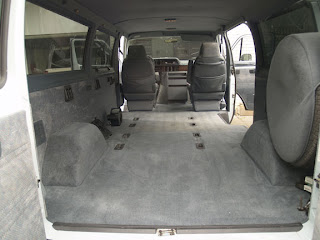 We added a trailer hitch and pulled our camper trailer all over the country. For my family and our lifestyle it was the perfect all around family "car."

Well, by 1996 that van had LOTS of miles on it and was becoming unreliable for long trips. Our kids refer back to our vacations in terms of, "That was the one when the van wheel bearing failed," or, "That was when the engine lost a valve."

So we replaced it—with another 3/4 ton NEW 1997 Dodge van. And the new one was a whole lot like the older one. Dodge didn't change the basic design much in those intervening years.

Now—some 11 years and 180,000 miles later—it's time to replace our favorite vehicle once again. So, why is this the end of an era, you ask? Why not just buy another one, and keep the tradition intact?

Well, Dodge quit making full-size vans a couple of years ago. The market went away. Everyone was buying minivans, or SUVs.

The Ford and GM vans lack the feature of bench seat removal without tools. We looked at them anyway, but declined. Carol fell in love with the big Ford Expedition EL, so that will supplant our 24 years of Dodge van ownership.

What are we going to do with the van? It's listed on eBay Motors right now.

If you want to look at all the pictures and see if anybody bids, here's the link. (Sniff.)
Posted by Duke_of_Earle at 8:58 AM 6 comments:

What's in a name?

Have you heard or read about the brouhaha over naming a teddy bear Muhammad? Of course you have. But just in case you haven't . . .

Gillian Gibbons, a British school teacher in Sudan, asked her class of seven-year-olds to name a teddy bear, right? And they (not she) decided on the name Muhammad. A few months later someone complained. She was arrested, charged with “insulting religion and inciting hatred” (hatred!?), and after an eight-hour hearing was found guilty and sentenced to 15 days in jail. She MIGHT have been sentenced to receive 40 lashes!

What? You don’t believe me? Read about it HERE.

Anyway, some of the folks in Sudan were so incensed that they rioted, chanting, “Kill her!”

Now, those of you who read this blog know that I usually avoid political or religious topics. Please allow me to put those prohibitions aside for one post.

I am a Christian. I believe that Jesus is the living son of God, and my savior. If you don’t believe that way, that’s fine. And if you want to name a teddy bear, or a trash can, or a toilet Jesus, I would simply smile, shake my head and go on with my life.

The God I worship does not need any man or woman to defend him. He is quite capable of defending himself. Frankly, in my opinion, ANY god who needs man to defend him (or his holy prophet) is not much of a god.

Do you know what a teddy is? In some circles it is an item of lingerie. You know—a lady’s undergarment.

As a joke (or an attempt to make people smile), my wife years ago made a small fake teddy out of vinyl material to hang in our car as a trash container. It’s really a caricature of a teddy, with fake lace and . . . 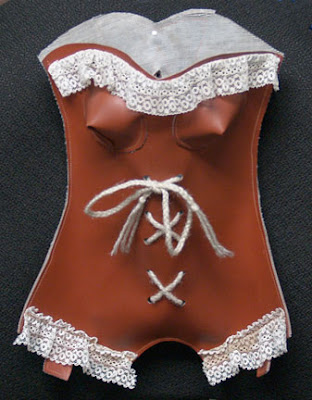 Anyway, I’ve decided to name the teddy. It’s never had a name before; it’s just been referred to as “the trash teddy.”

(And if anyone in Sudan reads this blog post, I’m in a HEAP of trouble!)
Posted by Duke_of_Earle at 9:51 PM 12 comments:

I put on shorts, a tee shirt, and sandals, and mowed the grass. Then I did some outside work on our camper and tow vehicle. We would have played golf today, again in shorts and a short-sleeve shirt, but Carol has a stomach bug so we stayed around the house.

The title of this post was intended for my dear blog friends in places like Chicago, North Carolina, New York State, Massachusettes, Vermont and just about anywhere in the country other than Texas and the deep South. Oh, and let's include the UK and most of Europe while we're gloating. Now Michelle in South Africa is heading into summer, so she can gloat over all of us northern hemisphere folks (except in June through about September!)

For some reason it's hard to get into the Christmas shopping mood in such weather. Now, our Thansgiving weekend was chilly and blustery so most of the town was out fighting the mobs at the malls on Black Friday this year. And I'm sure we'll get more chilly weather during the next few months.

As often as not, though, we'll have a colder Thanksgiving than Christmas. It'll be interesting to see if that happens again this year.

For now I'm enjoying the fact that our trees still have leaves on them, the grass is still growing enough to require an occasional mowing, and the golf course still beckons.

But don't be too jealous. Most of you don't have to deal with hurricanes and weeks of triple-digit temperatures. When I want to go skiing I have to travel about 1200 miles. And . . . let's see . . . are there any other disadvantages . . .