I ran across a famous quote today. I have used it myself, occasionally.

It is often attributed to Einstein, and goes like this: “Insanity is doing the same thing over and over again and expecting a different result.”

I’ve had observers apply that quote to my golf swing. I’ll think I’m changing a key aspect (grip, stance, angle, etc.) but they tell me they can’t see any change, and sure enough the ball keeps curving sideways. Time after time after time.

But today I had a different take on the saying. I saw it in a work-related article about the new health care bill, but the context isn’t germane. I just chuckled at it and went on.

Not long afterward I overheard co-workers complaining about a software application which seemed to display images differently each time they were opened.

That’s when it occurred to me – Einstein died in 1955 and never had the opportunity to deal with a Windows computer! He would have realized that there are some cases in which doing the same thing time after time DOES produce different results!

Thus he would have changed his definition of insanity. Something like this: “Insanity lies in expecting ANY two Windows computers to produce identical results after identical input.”

Well, of course! Part of my job when we have openings is to fill those vacancies with qualified applicants. I do that through a process called screening.

This screening is predicated on the assumption that there are more applicants than positions. And in my long career I’ve NEVER had fewer applicants than openings. Thus I have to assess each applicant to determine the best, most qualified one(s) for the job(s) I have.

Screening begins at first contact, which most often is in writing. A letter. An application form. Or today, maybe an email.

If you’re looking for a job and contact me in writing, wouldn’t you try to make a positive first impression? Of course you would! But then, maybe you’re different from a lot of people.

Here’s an email that came to my address yesterday. I’ve changed nothing except the name and email address. I didn’t even have to change the phone number (you’ll see why).

Now, each year I go to our local high school and present to seniors something I call “Getting the Job.” I talk about the screening process, how it all really works, what hiring companies are really looking for, and what they do and DON’T care about.

I explain why we HR meanies screen OUT applicants before we even see them or know whether or not they’re qualified. (Because we don’t have TIME to interview 30-50 applicants to fill one job!) Is that FAIR? Probably not! But it’s how the system works.

Knowing we only want to actually interview about 5 people out of the 30-50 applicants, we screen out based on spelling, grammar, and content in the person’s writing. Is that a valid predictor of future job performance? Again, probably not! But it’s all we’ve got, initially.

No, I won’t be calling poor Mr. Smith above. I can’t—he left a digit out of his phone number. I could (and I might) reply to his email. If I do, I’ll try to gently suggest that in future contacts with ANY prospective employer he be a little less . . . uh . . . casual. In fact, I’ll give him an example of a properly written and formatted employment query.

Heck, I do it for the local high school seniors! Why not him, too?

Our house is 38 years old, and we’ve lived in it for 24. Last October we replaced the two original wooden overhead garage doors with sparkling new steel-and-foam-sandwich insulated doors (can you say, “Energy Tax Credit?”).

And they are NICE! Whisper-quiet opening system (belt drive), and good, strong solid doors that almost glide up and down the rails. Expensive, yes; but I expected them to last as long as I own the house.

Did you catch the use of the past tense in that last sentence? Not a typo.

A few mornings ago while I was at work, Carol pushed the “open” button on the wall, and “her” door went up. Er . . . It started to go up! After about two feet of travel she heard a noise and the door stopped. She didn’t see anything wrong, so pushed the button again thinking that the door would reverse and go back down. But no, it started UP again(??). Accompanied by a cacophony of pops, cracks and groans, the door struggled to the top of its travel and stopped, but two of the four panels had buckled and sagged in the middle over her car.

She called me at work. I advised her to get her car out (quickly!), but not to touch the button, or her remote. I then called the company that had installed the doors and described what Carol told me. They sent a repair technician immediately.

He examined everything and left, scratching his head. He told us we’d hear from his boss.

The boss called later. “Can’t possibly be a defect in the doors or opening system. Never seen anything like it in 25 years in the business, but definitely not a warranty case. I’ll sell you a new door for $625.”

I asked, “So what damaged the door!? It was fine the day before. It lowered just fine the night before it failed.”

Answer: “Had to be something hit it from the outside when it was down, damaging the panels.”

I called the police to report apparent vandalism. (Not that the police could DO anything about it, but in case there were other reports of this kind of vandalism in our neighborhood, they needed to know.) An officer came and looked over the situation. His assessment: “No marks or scratches on the outside of the door. No broken glass or other indications. You heard no noises during the night, right? Nope, no other reports of problems around here. Definitely not vandalism. Probably the door jammed going up and buckled.”

Anyway, you know what THAT means! Plumbing will start leaking, electrical appliances will start failing, your home may develop strange cracks in the walls, and your car will start making noises and having mechanical problems.

Likely your computer will freeze, your hard drive will fry, and your modem will stop modem-ing.

Why Trampolines are Dangerous in Texas 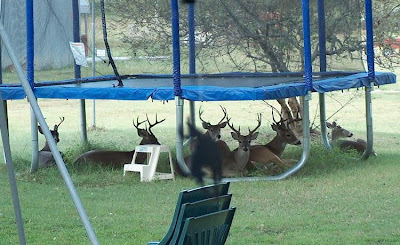 "If the enemy is in range, so are you." — Infantry Journal

"It is generally inadvisable to eject directly over the area you just bombed." — US Air Force Manual

"Whoever said the pen is mightier than the sword, obviously never encountered automatic weapons." — General MacArthur

The three most useless things in aviation are: Fuel in the bowser; Runway behind you; and Air above you. — Basic Flight Training Manual

"Any ship can be a minesweeper. Once." — Maritime Ops Manual

"Never tell the Platoon Sergeant you have nothing to do." — Unknown Marine Recruit

"If you see a bomb technician running, try to keep up with him." — USAF Ammo Troop

"The only time you have too much fuel is when you're on fire." —Unknown Author

"If the wings are traveling faster than the fuselage it has to be a helicopter — and therefore, unsafe." — Fixed Wing Pilot

"When one engine fails on a twin-engine airplane, you always have enough power left to get you to the scene of the crash." — Multi-Engine Training Manual

"Without ammunition, the USAF is just an expensive flying club." — Unknown Author

"If you hear me yell; 'Eject, Eject, Eject!,' the last two will be echos. If you stop to ask 'Why?' you"ll be talking to yourself, because you're the pilot." — Pre-flight Briefing from a 104 Pilot

"Mankind has a perfect record in aviation — we have never left one up there!" — Unknown Author

"Flying the airplane is more important than radioing your plight to a person on the ground incapable of understanding or doing anything about it." — Emergency Checklist

"The Piper Cub is the safest airplane in the world; it can just barely kill you." — Attributed to Max Stanley (Northrop test pilot)

"There is no reason to fly through a thunderstorm in peacetime." — Sign over Squadron Ops Desk at Davis-Montham AFB, AZ

"If something hasn't broken on your helicopter, it's about to." — Sign over Carrier Group Operations Desk

"You know that your landing gear is up and locked when it takes full power to taxi to the terminal." — Lead-in Fighter Training Manual

As the test pilot climbs out of the experimental aircraft, having torn off the wings and tail in the crash landing, the crash truck arrives. The rescuer sees a bloodied pilot and asks, "What happened?" The pilot"s reply: "I don't know, I just got here myself!"

(As a former U.S. Navy carrier jet pilot, I found many of these to be both reminiscent of my own military experience, and true.)
Posted by Duke_of_Earle at 8:52 PM 2 comments:

A young engineer, who had graduated with distinction, was leaving the office at 5:45 p.m. when he found the Company President standing in front of a shredder with a piece of paper in his hand.

"Listen," said the President, "this is a very sensitive and important document, and my secretary is not here. Can you make this thing work?"

"Certainly," said the young engineer. He turned the machine on, inserted the paper, and pressed the start button.

"Excellent, excellent!" said the President as his paper disappeared inside the machine, "I just need one copy."

Lesson: Never, ever assume that your boss knows what he's doing.


(This was sent to my company's managers by its President. At least he has a sense of humor . . . and maybe reality!)
Posted by Duke_of_Earle at 5:38 PM 4 comments:

The Earle family is not big on picking out special birthday gifts. Often Carol and I don't even buy the other one a gift for a birthday.

Oh, we always celebrate; usually with dinner out, some wine, or maybe even a round of golf at a slightly more "upscale" course than the ones we usually play. For our adult "kids" we usually just send the gift everyone wants -- a check!

Ah, but card selection is a different matter altogether! The message on the card is critical, and might require trips to several stores over a few days to find the one that is just right.

My daughters and I try to outdo each other with really awful puns. When I think I've found one for a daughter that's bad enough I show it to Carol. If she gags and retches, it's perfect!

But Carol and I, when picking out a card for each other, try for humor that's a bit more subtle. We also search for a message that will have a special meaning for the recipient. Maybe a double entendre. Even better, a card that's not intended to have a double entendre, but for us it does because of one of our (usually my) foibles.

We are not wine snobs. Oh, sorry, I meant wine "connoisseurs." We enjoy a glass of wine with a meal, and usually know if a particular wine is a red or a white (or even a "blush!"), but beyond that it's either smooth and pleasant, or it bites.

However, often a glass of wine (especially TWO glasses) leaves us in a fond, romantic mood.

That "foible" made this card she recently bought for me that much more appropriate: 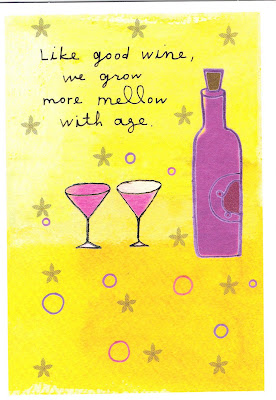 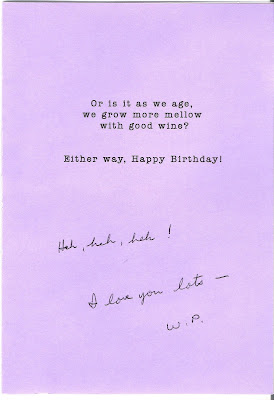 I'll leave it to you to figure out what the W. P. initials stand for.