(And yes, I realize that "bad puns" is redundant.)

You know how sometimes you are presented with an opportunity you just can't resist? Even thought you KNOW you'll regret it later?

Last week at work I attended a safety meeting (I know . . . BOOOORRR -- ing), the topic of which is immaterial. I was drifting in and out of paying attention, when Mark (the presenter) made an analogy. His point was that if you get used to seeing the same thing over and over and over again in constant repetition, pretty soon you just stop seeing the "thing" and focus on the repetition.

He said, "For example, if you're looking at rows and rows of numbers that are all 3s, eventually if a couple of 4s are included your eyes will pass right over them, right?"

My sad excuse for a brain figuratively went "click."

I blurted out, "You mean you can't see the fours for the threes?"

After a brief puzzled pause, the room cleared as people ran for the rest rooms to vomit.

Totally Inappropriate. And yet . . .

I'm referring to the Fathers Day card sent to me by my younger daughter.

You know, the daughter I've written about before with whom I compete to see which of us can send the other the birthday (or other-day) greeting card with the worst pun, the worst somehow fitting double entendre, etc.

Usually we just try to "out-clever" each other. The thrill is in the search for a card that somehow seems to make a however-vague reference to some foible in our lives.

The one I just received from her reads on the inside, simply, "Happy Fathers Day."

Ah, but it's the FRONT of the card that prompted the title of this post. 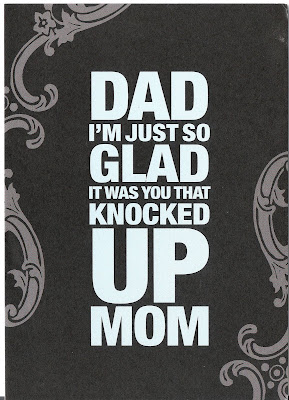 As I said: TOTALLY inappropriate.

I know; I brought it on myself. I was commenting on a Facebook entry and mentioned the dreaded “C” word.

But gee, did it have to strike so fast and so hard?

First strike was against my commute-to-work car. It has only 25k miles on it and came with new Michelins so there’s no appreciable tread wear. I evidently drove over something that sliced into the sidewall near the tread and suffered a flat.

No big deal, right? Right. In fact, while I was changing the tire in the shade of a handy overpass, two guys from my plant on their way home saw me, pulled over, TOOK over the job, and changed my tire for me. The tire dealer adjusted the price of the new tire for the almost new tread depth on the bad one, and I was on my way.

Next strike was my three-year-old, expensive but just out of warranty, Kitchen-Aid dishwasher. I was able to fix that myself (I’ll spare you the details) at minimal expense and with just one minor cut on a finger, but getting it out and then back in took the better part of my Saturday.

Then there was the blowout on our camper-trailer. That one cost me a LOT of sweat, plus three new tires; two on the axle and a new spare. Yeah, I know, I needed them anyway, but the timing could have been better!

Then yesterday afternoon my high-dollar, commercial quality, Echo weed trimmer just quit working. Right in the middle of trimming the lawn. No, it WASN’T out of gas! I think it was a fouled spark plug. I cleaned the plug, the air filter and the exhaust port (muffler), and now it’s running fine.

Finally (I HOPE!) last night my computer hard drive stared running continuously and all processes slowed to a crawl. Checked everything I knew to check, including rebooting, anti-virus scanning (no), downloading updates (no), other internet activity (no, disconnected from router to be sure), and just turned it off. Today it SEEMS okay, but I’m suspicious!

SO, BE WARNED!! Be on guard. Hopefully it’s just me, but don’t count on it! Last night my daughter in Tampa had a rock thrown through the window of her car right in front of her house. Nothing stolen, just vandalism. But the cost of replacing the window will hurt.

Remember, the ycaripsnoc can (and WILL) strike at any time.

If you follow me on Facebook, you saw my very brief tale of changing a blown-out trailer tire on the shoulder of a major highway with traffic whooshing past at 70. But I didn’t tell about the keys.

The blown tire was on our camper-trailer. I keep a hydraulic bottle jack in a small front compartment of the trailer, accessible through a locked hatch. After struggling in the blazing sun for nearly an hour to get the tire safely changed, we secured everything, put away the tools and the jack, and made the trailer ready to resume the trip home.

The spare had been a little low on air, so I drove slowly down the shoulder for about 2 miles to the nearest gas station/convenience store. I aired the tire while Carol went inside to buy us LARGE cold drinks. I had sweated away at least a quart of body fluid and was shaky with exertion and dehydration.

We rested there for a few minutes standing in the gas station parking area while I gulped the icy liquid. Carol then asked, “Where are the camper keys you used to lock the hatch when you put the jack away?”

I gave her my best blank look, patted my pockets, glanced around at the front of the trailer tongue area, and shrugged.

“Well, where did you put them?” I told her I didn’t know. I remembered securing the jack and locking the hatch, and then I . . . what? Did I put them in my pocket? Not there now! Did I set them down on the trailer tongue? Not there now! Did I toss them into the open tool box I had been using?

We opened the back of the SUV and rummaged through the tool box.

I struggled to think back, but there was just no memory of the keys after locking that little hatch. We decided I must have laid them on the trailer tongue and left them there. Surely they fell off while we crept down the shoulder looking for an air hose for the tire.

I was ready to write them off and drive home. We had others (duplicates), and I could get more made. But no; we had to go back and look for them!

We pulled the trailer out of the gas station and back onto the opposite side of this 4-lane divided highway. I located a crossover beyond the point of our blowout, waited for traffic to clear, and retraced our path to the spot of changing the tire. There I stopped and Carol got out and searched.

Well, maybe they fell off the tongue between here and the gas station! We crept along the shoulder of the road scanning for this small ring of about 5 keys with a blue plastic/rubber rectangular tag or grip attached, while traffic kept roaring past. It should have been obvious if it had been there. No luck.

I was sure the keys would have landed and stayed right where they fell, since I had been driving so slowly with the soft tire. They couldn’t possibly have “bounced” into the weeds!

Back at the gas station we parked again, got out and scrutinized the area where I had turned in. Nothing.

I gave Carol a look of resignation and said, “They’re gone. It’s my fault. Let’s just go home and I’ll get more copies made.”

She nodded but stood there, hands in her shorts pockets, as if thinking. A strange look came over her face.

She jerked out her right hand holding the key ring! It had evidently been in her pocket all along.

I KNOW I locked that little hatch, but I have NO MEMORY of handing her the keys. She has NO MEMORY of taking them from me, or picking them up, or putting them in her pocket. She also says she checked her pockets several times after we discovered the keys were missing.

We decided we are both senile.