Okay Jan, you asked for it. (See Jan’s comment on my post below this one.) You want controversy? Here you go.

(BTW, don’t you love the British pronunciation of the word “controversy,” with the accent on the second syllable? If you’ve not heard it pronounced that way, watch some old British movies. "Con–TRAH–ver–sy.")

I learned a principle some years ago that helps me understand seemingly complex issues or problems. Simply stated, you take an issue to its extreme and see if (at that sometimes ridiculously extreme point) the rightness or wrongness of it doesn’t become apparent.

Example: This article regarding universal health care for all Americans.

Health care is a good thing, right? Of course it is. When I, or someone I’m close to, is sick or injured, I want to be able to have an adequately trained, licensed, insured professional treat the condition.

But I’d have lots of questions. What care/treatment do they need (not want)? Is that treatment appropriate for them, for their condition, for their lifestyle? What will it cost? Are there alternatives? And many, many more.

And who says MY opinions about those questions and answers are “right” or “wrong?” Well, I say so, right? But do I really know? Who am I to make those decisions for someone else?

Ah! More to the point, who should make those decisions for ME?

I find myself thinking in circles.

Mr. Stein was asked these questions:

“Why should everyone be guaranteed free health care? And if we guaranteed to people goods and services they could not afford, where would it ever end? Where would it end short of assuming that everyone has a right to everyone else's property and labor?”

And then he began taking the issue to some extremes by asking:

“ . . . do I want to have patients seeing masseuses? Do I want them to be able to see the same psychiatrists that billionaires see? What about a nose job? A plastic surgeon could make up a medical need for a nose job or even a face lift. Where does it end?”

He continues down that philosophical road until he reaches its extreme end:

"If we have as a social rule that poorer Americans are required to have the same good things that rich people have, where is the stopping point? Where do we stop short of confiscatory taxation, taking away property, taking away affluent people's homes and basically abandoning the bedrock of the free society -- private property -- to achieve equality?"

Read the article. Mr. Stein does offer a few ideas (not really “solutions” though). But he does reach a conclusion about the debate, stated as:

“Maybe as important as health care is, individual freedom and private property are indispensable, too.”

Gee, ya think? This all gives me a headache.

I accused my daughter of being a Bad Blogger. Why? She has become so addicted to Facebook that she only posts on her blog a few times per month.

Then I looked at my OWN blog. Hmmmm. Kinda like looking in the mirror and saying, “Bad blogger!” (Pot and kettle syndrome?)

So what’s my problem? Well, I just hate to sound like a broken record, saying the same thing over and over.

Aside: Think about that – has anybody under the age of 30 (or 40?) actually heard a “broken record?” Do they even know what a “record” is (beside what’s in the Guinness book, I mean.)

Reminds me of that VERY old joke about the first automated airline flight. You know:

So, what’s that got to do with blogging? Well, it seems that all I’ve been able to focus on and think to write about for the last two months is the HEAT! I don’t want to keep blogging about how hot it is here.

I know, I know: Global Warming, right? Well, ask the folks in the Northeast about that. This is one of the coldest summers on record for some of them – how about you, Kirsten?

Anyway, I know the alarmists are changing their mantra to “Global Climate Change” from “Global Warming” in order to accommodate the record cool/cold that strikes some regions and confuses people who thought they had it all figured out. Don’t get me going on that topic, please, or I’ll have to drag out the articles that report warming and reduction of polar ice on other planets in our solar system (but fail to mention how our man-made CO2 got to their atmospheres to cause it).

I guess I could blog about the evils of government-sponsored health care, and challenge any random reader to report any successful example of such in the world. Then I might wonder aloud (so to speak) in a subsequent post why our President and Congress think we are smart enough to avoid all the problems and inefficiencies of such systems elsewhere.

I could decry the economic stimulus plan(s), and ask rhetorically how we can avoid runaway inflation to pay all the debt we will (or have already) incur(red).

OH! Have you seen this political cartoon? I love this: 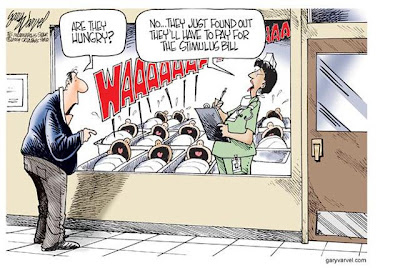 No, I could write about all those things, but I’d just get myself in trouble. So I think I’ll go back to the standard, “It’s HOT here.”

I know. Everybody talks about the weather.

Well, I’m not here to talk about it, I’m here to COMPLAIN about it!

Now, that was just July, right? How about June?

Well, the last 8 days in June were ALL at or above 100! The last time we had a high below 98 was June 20, except for that one anomaly in July. That’s 22 days, with only one exception. Three weeks, and counting.

So, if anybody asks you, tell them (on good authority) that the Hades Index here is right about at 100%, meaning it’s hot as Hell! Oh, and it’s dry, too. Our paper said that thus far in 2009 we’ve had only about 6 inches of rain. All year! That’s like desert climate.

(Had enough complaining? Oh, all right; I’ll stop. I’ll be in a better mood next time, I promise.)
Posted by Duke_of_Earle at 4:44 PM 3 comments:

(This is making the email rounds, especially in the Lone Star State. Substitute your own region or area of domicile, and you'll think it funnier.)

God was missing for six days.

Eventually, Michael, the archangel, found him resting on the seventh day. He inquired, "Where have you been?"

God smiled deeply and proudly pointed downwards through the clouds, "Look, Michael. Look what I've made."

Archangel Michael looked puzzled, and said, "What is it?"

"It's a planet," replied God, “and I've put life on it. I'm going to call it Earth, and it's going to be a place to test Balance."

God explained, pointing to different parts of earth. "For example, northern Europe will be a place of great opportunity and wealth, while southern Europe is going to be poor. Over here I've placed a continent of white people, and over there is a continent of black people. Balance in all things."

The Archangel, impressed by God's work, pointed to a land area and said, "What's that?"

"That's the State of Texas, the most glorious place on earth. There are beautiful rivers, mountains, streams, lakes, forests, hills, beaches and plains. The people from the State of Texas are going to be handsome, modest, intelligent, humorous, and they are going to travel the world. They will be extremely sociable, hardworking, high achieving, carriers of peace, and producers of good things."

Michael gasped in wonder and admiration, but then asked, "But what about Balance, God? You said there would be Balance."

God smiled, "There's Washington, DC. Wait till you see the idiots I put there!"
Posted by Duke_of_Earle at 5:09 PM 4 comments: 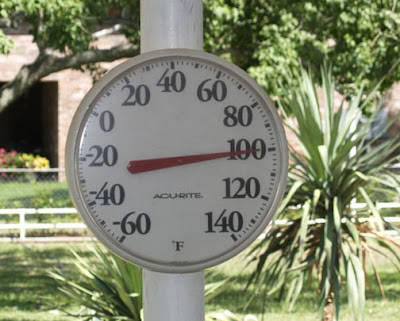 No, I am NOT out playing golf (or doing anything else) today!
Posted by Duke_of_Earle at 4:10 PM 4 comments:

Ask, and ye shall receive!

In my previous post I complained about the heat, right? Right!

The forecast (for the part of Texas where we were) called for more days of triple-digit temperatures, but with “isolated thunderstorms.” We decided to play golf anyway, but to cut back on the length of time we spent out IN that heat.

Tuesday dawned with overcast skies, and temps in the upper 70s. Fine.

But to our amazement, the skies stayed overcast all day, and the temps never rose above the low-to-mid 80s! Wow! Great golf weather!

Well, then on Wednesday the sky stayed overcast (with occasional very light drizzle, but no real rain), and again, temps in the low 80s!

Gee. Maybe I ought to complain about things more often . . . ya think? (Carol says an emphatic “NO!” According to her, any more complaining from me might exceed some kind of arbitrary limit. I have no idea what she’s talking about.)

We are now back in our hometown of Victoria. We were greeted and welcomed home by the announcement below:

(VICTORIA, TEXAS) The level in the City of Victoria’s Off-Channel Reservoir #8 has fallen to elevation 42, which is approximately 50% of its maximum capacity. As a result, the City is initiating Stage II of its Drought Contingency Plan beginning Friday, July 3. The following restrictions apply under Stage II:

It seems that Victoria is now one stage beyond "Extreme Drought" and is considered to be in "Exceptional Drought" conditions!

With lots of restrictions, water rationing, and so on.

Well, given my experience earlier this week, I'm going to start right now complaining about the lack of rain.

If you notice on the national news a story about floods in this part of Texas, you'll know the reason.
Posted by Duke_of_Earle at 8:53 AM 2 comments: