Actually Candace asked, as a comment to yesterday's post, "When was the last time your area was affected by hurricane, anyway?"

That would have been Hurricane Claudette in 2003.

Here's a picture (and no, Carol didn't take this one): 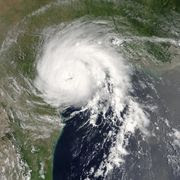 Claudette hit us as a category 1 storm with maximum sustained winds of 90-100 mph. Didn't sound like much, but those winds caused a lot of damage to trees and overhead power lines. We were without electricity for three days.

Compared to Ike, that's not much. I've heard that some folks in Texas along Ike's path have been told they may remain without electricity for 4-5 WEEKS!!

Not long after Claudette, I bought a generator and several 7-gallon gasoline containers. I haven't used it yet, thank goodness. It's still in the box.

Makes me wonder if it will run when I need it. Hopefully I'll never have to find out.

Pictures to come -- soon, I hope. We've just returned home to find . . . absolutely NO damage of any kind from Ike. In fact, Victoria, TX, got NO rain at all from Ike. Nothing. Nada. Zilch.

Here's my tale: First Dolly roared in well south of us. Next, Edouard pummeled Beaumont to the north of us. When Gustav was taking dead aim at New Orleans, we headed north to Chicago and missed all contact with that storm.

Then, while Fay was dancing back and forth across Florida we drove to Maryland to visit my sister. The following days saw us driving south to Georgia just as Hanna was headed up the East Coast toward South Carolina. We (Hanna and I) crossed, but I was far enough west and the storm far enough east that we saw only the very edges of the highest clouds -- no rain and no wind.

Meanwhile Ike was taking aim at Florida and Georgia (the then-likely path of the storm), but zigged to the south and into the Gulf. For two days the center of the projected path cone was Matagorda Bay, TX, just 30 miles from Victoria. We envisioned coming home the following week to (at the very least) spoiled food in the fridge and freezer due to the inevitable power outage, not to mention probable damage from tree limbs and wind. At least Victoria is well inland and there are no fears of storm surge or rising water.

But, Ike decided to ease north just enough that we had on power outage and no wind to speak of. Not even any rain!

So . . . I'm thinking of hiring myself out as a hurricane repellent. When there's a storm in the Gulf I'll immediately travel to the location of the highest bidder. When the storm then goes elsewhere, THAT location will wish THEY had upped the ante a little!

To all my blog friends: Thanks! (For stopping by, and for caring!)

I didn't broadcast it this year, but Carol and I are today in South Georgia on our way to Tampa to visit daughter and grandson. We've been through Chicago to visit other daughter, then to Maryland to see my sister, and we managed to dodge Gustav and Hanna with nary a puff of wind nor a drop of rain.

We were worried about Ike disrupting our planned Georgia golf, but he decided to go into the Gulf and again we never saw any rain or wind. In fact, it's been hot, humid and still.

We won't be heading home to see what Ike has done until Tuesday. If all the food in our freezer is spoiled . . . Oh well!

So, don't worry about us -- we're far from Texas and quite safe.

Karyn, you'll probably get more rain than our town will -- maybe YOU'D better run. Viki, sorry I again passed through Chicago and didn't get to meet you -- maybe next year! And Goddess, be thankful for the rain and no cyclones!

Maybe I'll be better about posting once this vacation is over. I'll at least let you know if we had any damage from Ike.
Posted by Duke_of_Earle at 4:48 PM 4 comments: