Have you seen this one?

(It's making the rounds of internet email.)


"I GOT STOPPED FOR SPEEDING YESTERDAY.

I THOUGHT I COULD TALK MY WAY OUT OF IT,
UNTIL THE COP LOOKED AT MY DOG IN THE BACK SEAT . . ." 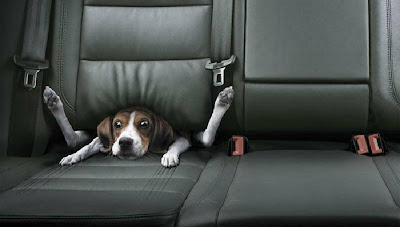 Well, I thought it was pretty funny.

And because I HAVE been known to "push the limits."

(I particularly liked the claw marks on the seat!)

What a great Easter weekend!

After the last two or three years of getting either rained out or frozen out, we finally had three good weekend days in a row for golf at and near Kerrville, where we camped. Eachnight we bundled up under sleeping bags when the outside (and inside) temperatures dropped into the 40s. But the days quickly warmed up into the 70s or low 80s, so by afternoon we were golfing in shorts and short sleeved shirts.

I even came back with a slightly sunburned neck!

All danger of frost is now over in this part of Texas.

What? How do I know? Because the mesquite brush and trees are putting out their yellowish-greenish leaves. Common local folklore has it that once the mesquite leaves come out there'll be no more frost till the following winter.

I, on the other hand, played. We won't talk about scores.

We took the camera but have not a single picture to share. Call it laziness on our part, but we just never saw anything that begged to have its image recorded. So, we forbore.

Carol has already asked me when I'm planning to take her out of town to go camping again. If this past weekend trip was an indication of what the next trip will be like, it won't be long.
Posted by Duke_of_Earle at 6:10 PM 2 comments:

Today it made it up to 90. All the trees are now in leaf. I mowed the grass weeds on Thursday. Our blackberry bushes along the back fence are beginning to bloom.

Since tomorrow's high is "only" supposed to be up to 76, it's probably just local. Gee, wasn't it just last week that Dallas got 9 inches of snow?

Anyway, for those of you still shivering in snow, take heart! Spring is on its way. I'll try to send some of this warmer weather your way soon.

But not too much of it. I'd like to save a little in case another "Norther" tries to blow down this far towards the equator.

It could happen! Next weekend is Easter, and on Easter weekend last year we took our camper to Kerrville and shivered in sleet and freezing rain for two days. Not exactly your ideal golf weather.

(Yeah, we're going to try again this year. I'll let you know if it happens again.)
Posted by Duke_of_Earle at 4:16 PM 9 comments:

No gun, no knife. Just a nice guy!

Did I express a bit of angst? Did I sound paranoid? Hmmm. What’s WRONG with me?

(Oh, and see yesterday’s post for some background on this story.)

Ahem. Well, as per my plan I drove to the local Motel 6 to drop off my car. Now, I would have just parked it, locked it, and gone home (Carol had followed me there in our other car). But no – Carol insisted that I go inside and tell the desk clerk what I was doing, “So they won’t have your car towed away!”

I harrumphed something along the lines of, “Yeah, like they’re gonna go out and patrol the parking lot in the Motel 6, check license numbers, and have a car towed! Gimme a break!”

But you know how demanding wives can be sometimes are, so I went in. The enterprising clerk told me that leaving the car was fine, but checked her reservation listing and found no Aaron Smith (not his real name) on it. Inspired, I asked her to check the TUESDAY night list and sure enough, there he was. But the motel was full for Monday night.

I visualized this poor guy getting into town at 1:30 am, taking a taxi to the motel, and having no room. What’s he gonna do – sleep in the lobby? I called his cell phone number and actually got him! He was on the train between Beaumont and Houston.

After some effort, I found him a room in a different motel, found him an all-night taxi service that would take him there from the bus stop, and called him with the information. Yes, I left my car at that motel.

Then this morning I drove the van to that motel and went to the lobby. Two minutes later, in walks this really clean cut, 30-ish man with a firm handshake and a wholesome look about him. He says, “You must be John! I’m Aaron.”

He drove the van, pronounced it all he’d hoped it would be, counted out the exact amount in crisp new bills, and I signed over the title and gave him my two sets of keys. He was very appreciative of my efforts on his behalf (motel, taxi), and of the car.

We shook again, I left for work, and he went back to his room for, “A few more hours’ sleep before I hit the road for home.”

Y’know, there are a lot of creeps and crooks out there, but there are also a lot of good, honest people.

Aaron Smith seems to be one of the latter.

And by the way, Carol? Thanks for insisting!
Posted by Duke_of_Earle at 9:45 AM 4 comments:

The buyer of my van lives in New Orleans.

Today he’s taking a train to Houston, getting on a bus to Victoria, and pulling into town at 1:30 Tuesday morning. He’ll be staying for what’s left of the night in the local Motel 6.

Tonight after work I’ll drive my old commute-to-work car over to the Motel 6 and leave it there overnight. Then in the morning I’ll drive to the motel in the van, collect my cash, sign over the title, and head to work. My buyer can then hit the road for New Orleans in his new (to him) Dodge van!


I know. I’m being paranoid.

But I just wonder why his cell phone area code AND his eBay member profile zip code both originate in Buffalo, NY. That does make me curious.

Tune in tomorrow for what I’m sure will be a boring, routine conclusion to this mystery.
Posted by Duke_of_Earle at 1:48 PM 3 comments:

Yep, the van has been sold.

Well, I haven’t got any MONEY for it yet, but the eBay auction is over and the winner has contacted me to make arrangements to bring me cash!

I had tried on eBay Motors back in December, but I’d set an (apparently) unrealistic reserve (minimum price), and nobody bid even close to it.

This time I did some additional research and set a reserve that was lower than I hoped to get, but that I was willing (reluctantly) to settle for. Imagine my joy when the second day of the auction somebody bid the reserve price! I just KNEW was pretty sure hoped prayed that the final price would be even higher.

Sure enough in the last few hours of the auction the price jumped up, as is typical, to more than $700 above my reserve price.

So now if the winner will just show up with cash as promised . . .

Our van will sell this time!

And if you want to watch with us the auction of our 12-year old Family Vacation vehicle on eBay, click HERE.

I had tried to sell it on eBay back in December, but set a high reserve (which I thought it was worth!) and no one bid an amount even close. This time I set a much lower reserve, and the first bid exceeded it. It WILL sell this time!

We're sorry to see it go, but we've already replaced it with a nice, new Ford Expedition to pull our camper trailer with. The Ford is MUCH quieter, and smoother-riding, and more luxurious, and on and on.

The auction will end on Tuesday evening. Watch if you like. Hell, BID if you like! It really is a fantastic utility vehicle. And if one of my blogger friends buys it I'll get to meet you!
Posted by Duke_of_Earle at 6:33 PM 2 comments:

You gotta read these!

If you haven't visited the Pointmeister lately, please go there as soon as you read this brief post and check out his post for Friday, February 29, called "Disorder in the Court."

If you don't ROFLYAO, you're either not alive or you have no sense of humor.

Wonderful! I need to buy the book.
Posted by Duke_of_Earle at 6:25 PM No comments: