The Presentation, and more

Fathers’ Day, 1994, arrived. Amy was home for the summer, and was obviously excited about the gift she had managed to find for me and looking forward to my reaction.

I had no idea what it was. When she handed me the package she told me to open it first, and then she had a story to tell us about it. As soon as I had enough of the wrapping removed to get a glance at the magazine cover with the Beatles’ picture, I knew!

“Where did you find this?” I demanded. She began her story as I finished unwrapping the package and passed it around for others to see. The story continued for quite a while.

(Side note: Amy is her mother’s daughter. They share so many characteristics that Amy’s friends refer to Carol as “Number one” and to Amy as “Number Two.” And no, that’s not any kind of reference to waste. Christina, on the other hand, is her father’s daughter. I won’t tell you what her friends call me and her! However, one trait Amy seems to have gotten from me is the ability to tell a story in as many words as possible. Short-winded we are not.)

You already know the story of the search from yesterday’s post. When she got to the part about the dealer asking her how much she’d be willing to pay she declined to tell us what it had cost, saying only, “More than I had planned to spend.”

Now do you see why I was willing to stand outside for four hours in the cold to help Amy get her husband his Xbox 360 for Christmas? Does this better explain the “family tradition of ‘above and beyond’ gift acquisition and giving?” Okay, then. I’m glad you “get it” now.

As far as appreciation of the gift and the effort goes, below you’ll see a picture of the display on my den wall of the magazine (in a glass-front case, matted, complete with a copy of the article AND my Olympic gold medal! Yeah, the medal is a fake replica. So?) 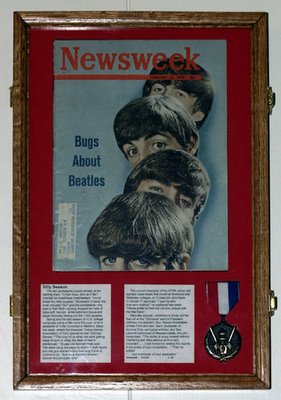 Yesterday I promised you some irony. Here we go.

When Amy finisher her long, proud tale of her search for and acquisition of this rare treasure that immortalized her father, I excused myself and went to a desk in a different room. When I returned to our den, I handed her another copy of the same magazine!! I think I made some really dumb comment like, “Gee, it looks just like this one.”

Her jaw dropped. “But you said you didn’t have a copy!”

Well, I didn’t. But sometime during that last year I had mentioned in a phone conversation with my mother that I had told my daughters that story, and asked her if she remembered that episode. She told me, “Oh absolutely. I still have several copies of the magazine. I’ve saved them all these years.”

She sent me one so I could show my daughters some time. I put it in the desk drawer and forgot about it. None of us (except now, Amy) had any clue that the magazine had any value to anyone outside our own family.

Don’t worry. Amy wasn’t crushed. I told her that the efforts (and expense) she had undertaken in finding that gift made it much more precious and special than any other copy. Hers is the one in the display case!

In response to emails and comments to yesterday’s post:

VIKI, I “dragged you through three days of this” because:

1. It’s a long story. I try to make my posts like Readers Digest stories: short, easy to digest, bite-size. In its entirety with pictures this would have been just too big.

2. I probably don’t create text or type as fast as you do. And I have a life and a job outside of blogging. I simply didn’t have TIME to put all this together into one post. Breaking it up made it possible to still have something new on here every day, and not overwhelm you wonderful readers (I hope).

JUDY, finally, yesterday, Amy admitted to me that she paid the New Jersey dealer $75 for the magazine in 1994. But she reminded me that she probably spent a lot more than that in gas for her car and long-distance telephone charges trying to find the thing!

Anonymous Emailer: You asked if I planned to come out of retirement and participate in future ATGA competitions. The answer is no. Like Lance Armstrong, I decided to walk away from my sport at the top. There’s never been another nationally recorded Olympic champion in toilet paper unrolling since I won the title in 1964, so I have continued my reign for over forty years. Not may sports heroes can make that boast.

Yet another Earle family tradition. Eat your hearts out, all you members of lesser family units!
Posted by Duke_of_Earle at 2:58 PM

That really is a great story.. And i can certainly understand why you would stand out in the cold and wait for a game system.. :)

Indeed, a great story! She is a good daughter to spend so much time and energy on finding the magazine for you!

The excitement is in the journey and not the destination and Amy, like she proved with the Xbox, I think gets true satisfaction and reward from the way she goes about getting the perfect gift just as much as she enjoys giving it. Thumbs up to Amy - a remarkable woman.

As for your story - I enjoyed the journey (instalments) and loved the final chapter. I think you should reconsider your next book. You have such a gift for storytelling and so witty and by combining the two in a book would most certainly be a bestseller.

I'm in the market for a new literary agent. Are you interested? I need someone who will present my work enthusiastically to a publisher and generate excitement for the market potential. Are there any publishers in Cape Town?

(Thanks for the kind words!)

I could be really snotty and take some serious umbrage to the phrase:

"And I have a life and a job outside of blogging."

In fact, if I were married to you, a comment like that would lead to a few nights sleeping on the couch!

But I know you didn't mean it that way. And besides, I don't have a life or a job outside of blogging;)

It was a great story, I particularly like the irony at the end. The whole thing would make a fantastic short story. That O Henry story, the one with the hair clip and the sold hair, remember that one?

Although, if I were writing it myself (and I won't steal your story or anything, I promise), I would have Dad not show Amy his copies of the magazine at the end, but hide them away. And then, come 2005, when her husband so dearly needs that xBox 360, I'd have him trade his copies on eBay with some guy selling xBox 360s. Okay, so I wouldn't take it that far.

Okay, blah blah blah. It was a great story. It would have been too long in one chunk. I don't mind having to come back every day or so to check for the next installment.

I wish you and Carol and the rest of your family the most JOYOUS of New Years.

Wishing you, Carol and the family, richest blessings for 2006.

PS - I'll check around for a good publisher for you *wink*

Wow. What a story.

Happy new year wishes to you!

WOW, long winded was the one part that stood out to me by the time I got to the end. LOL, But you do tell a great story.

Just poppin in to say, Happy New Year and may 2006 be full of joy, happiness, and success.

Gee, Viki. You'd sleep on the couch because of that comment? OK... Whatever.

Re: your O Henry reference -- yes, I know the story well. Had I been writing fiction, I might have been tempted by your version. But being constrained by the actual events, I just reported the facts. You know: truth vs. fiction? Anyway, thanks for understanding that I was not trying to be ugly in my comments to you. :)

I agree with Vicki...ouch to the life/job comment...it's a good thing you're so lovable.

Soooooooo...did you ever sell the other magazine?