As a result I am now mellow. The “Conspiracy” is now a laughable bit of fancy cooked up in my tense, paranoid brain (brought on by low levels of essential herbs, spices, and controlled substances).

Oh, and the call from “Homeland Security?” I remember that, and have to laugh. It seems to me NOW (in clear, lucid hindsight) that I really DID get a phone call on Monday. But it was from a political pollster asking which state senator I was planning to vote for in our Texas primary election coming up in a few weeks.

I may have told them that Osama bin Laden had my vote — the details of the call are very fuzzy now. It seems that Osama’s name did come up in the conversation. Or did I just say, in answer to the question of who I would vote for, “Oh, summa them are okay, I guess.” That sounds like "Osama." If you say it fast. And you’re delusional. Whatever.

But many thanks to all of you who expressed sympathy, empathy, or some other kind (or even SEMI-kind) sentiment ending in "pathy." To those who emailed me that Osama was coming to get me and that I would rot in Hell for making light of him, well...

ANYWAY... Today things are on a much more even keel. Many of you (in THIS hemisphere at least, and I mean Northern as opposed to Western) are still in the depths and throes of winter. Here in Texas, spring is already springing .

On most January weekends Carol and I went to the golf course dressed in shorts and short-sleeved shirts. Then we left for our Colorado ski trip and were able to experience true winter for 5 days (with pictures to prove it). When we returned, our part of Texas had its annual one to two weeks of “winter” (defined as highs in the 50s, lows in the 30s, with occasional drizzle.)

But now, "For lo, the winter is past, the rain is over and gone. The flowers apppear on the earth, the time of pruning the vines has come, and the voice of the turtledove is heard in our land. -- Song of Songs 2:11,12" This past Sunday found us again playing golf in sunshine with short sleeves on.

No, not the sunshine; WE had the short sleeves on. The sunshine was unclothed. (Naked sunshine. What a concept!) Our next-door neighbor mowed his lawn, reminding me that ours needs mowing as well. But it’s hard to concentrate on yard work when you’re thinking about Osama hiding in a cave in Afghanistan in the dead of winter, freezing his beard off.

Ahem. Back to the weather. OH, YES, further evidence of an impending spring is that one of the big yuccas in our landscaped area that used to be our swimming pool is getting ready to bloom.

Have you ever seen a yucca bloom? They’re beautiful! They send up a tall center shoot that towers three to four feet above the top of the “leaves.” Then soon that center shoot is covered (the top two feet, at least) in little white bell-like blossoms.

Well, since a picture is worth a thousand words (or some multiple thereof, depending on which quote you want to use); here’s a thousand-word description of a yucca in partial bloom (from last year). 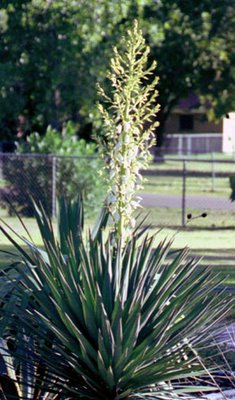 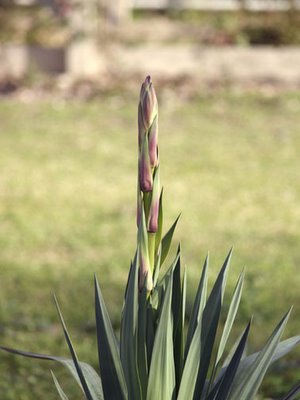 (I’ll get you another shot in a week or two when the plant is in full splendor.)

There you have it. Proof-positive that spring has arrived in Victoria. Political pollsters are calling during supper, and Osama’s beard is freezing off in Afghanistan. (Yucca, yucca!)

What more could you want?

Something eerie is happening. First the "you know what" gets our appliances talking to one another, then it spreads to other members of your family and now you say Spring has started on the exact same day we had our first heavy rain of the season. Mere coincidence?

I hope you are feeling better today. Our power cuts were short tonight - I guess they are giving another area a chance to be without electricity. And I loved your pics.

Please make good on your threat to post the photo when the yucca blooms. I want to see it.

We had 77* today and tomorrow will be even higher, but the weekend will be back down to more normal temps for us - in the 50's. Boo.

Michelle: Spring here has arrived on the same day as your heavy rains begin, and you say it's "eerie?" Whole religions have been started on less than that!

Kenju: "Threat?" No, a promise! I'll wait till it's in FULL bloom and snap you a good one, now that I'm fully digital!!

GOlf in short sleeves. I went for a jog it was 1 out. 23 below with wind chill. I only went three. NEver was able to get comfortable, yet that's part of the reason I went

I'm still upset because us folks on the East Coast didn't really have a real winter. I mean, we got some snow, but that was a joke because it melted the next day.

So, that's what a yucca looks like! Until this moment the only thing I knew about the yucca was that it was the answer to the corossword clue: Southwestern plant.

Short sleeves? What are those? :-D

Dropping by to send you my best wishes and hoping you are on the mend.