Another one of “those” emails

This came to my inbox today.

It has the earmarks of one of those “unban legends” or “scams,” or something just made up by somebody. But it’s fun, so play along with me, OK. If you’ve already seen this, well... go back and read the post last week abut the fractured English translations. That was funny.

Okay, here goes: This is a psychology test.

Instructions: Read this question, come up with an answer and then scroll down to the bottom for the result. This is not a trick question. It is as it reads. All the information you need is in there.

A woman, while at the funeral of her own mother, met a man whom she did not know. She thought this man was amazing, so much her dream man she believed him to be just that! She fell in love with him right there, but never asked for his number and later could not find him. A few days later she killed her sister.

Question: What is her motive in killing her sister? (Give this some thought before you answer, and be prepared to defend your response).

Now, in the email you were told to formulate your answer and scroll down for more. I don’t want to do it that way.

Please do NOT put your answer in a comment.

Please DO comment if you have formed an opinion and think you can defend it... Just let me know by saying, “I’ve got it,” or something similar. That way others won’t be influenced by your answer. Once I get a decent number of comments (how many would it take to be INdecent?), I’ll post the rest of what was in the email, and a little more information. That may be later tonight or tomorrow morning, depending on how many of you think you’ve figured it out.

And no, this is NOT just a shameless attempt to get you to comment and then come back later. (although, yanno, that COULD work, come to think of it...)

OH!! One more thing. My yucca bloom is on its last, uh... legs(?), and I wanted to show you what it looks like. The lower blossoms have begun to fall off, and the top buds have just about finished opening. 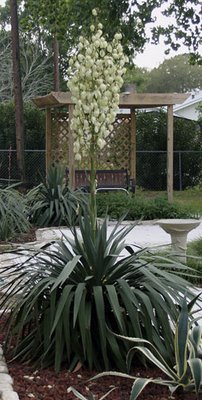 Now I'll try to show you one reason the blossoms look a little scraggly. Here's a close up. What's buggin' my yucca? 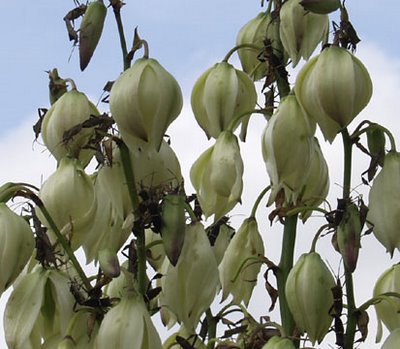 John, I'm pretty sure I have read this is, or something very similar before. So in fairness, I'll disqualify myself for now, for if what I think is the answer is correct, I will have gotten from memory rather than actually solving it.

I have a couple theories, but they are not that good. OK, I have no idea, I am just trying to boost the number of comments so you will post the rest. Whatever.

And, RE: yesterday's post - who is Miss Snark? Someone who rejected you? Or did I miss something somewhere?

Its too bloody obvious, she killed her sister as they had a row at the wedding over what type of ketchup she had with her steak.

Either that or she is just a phycopath,phychopath,phycopath,scicowpath.

Can someone please tell me how you spell it ?

I have seen that email before - but I don't remember the answer and have NO clue why she would kill her sister.

You got it wrong. The Butler did it. *grin*. After such a stressful week, I am not able to wrap my brain cell around a riddle but I am very curious as to why she killed her sister. I will sleep on it and maybe the puzzle will come together for me.