The last two days have been partly sunny, partly cloudy, but with temperatures in the 80s. Plants around here all seem to think it's spring.

Our ash trees are in leaf, the pecans are budding, and the cottonwoods are going crazy.

We played golf today in shorts and short sleeved shirts, and sweated! (I shot 88, since I KNOW you're all interested. It's the first time I've broken 90 in months, so I was pretty happy.)

What's that? You want to know what Carol's score was? I don't think I remember. I DO remember that she complained that she wasn't playing very well today.

You want me to ASK her??

I hope you're happy now!

What, you ask, does that have to do with our yucca?

The yucca's central blooming stalk is now a good four feet tall above the leaves, and is showing the individual stalks that the buds and flowers will appear on. Here's today's status:

I may have been optimistic in thinking that it would be in full bloom by the middle of this coming week, but we'll see. I'll keep providing photographic evidence of its progress until it's in full bloom, which is really quite impressive.

P.S. Faith commented (see below) that yuccas are not fazed by ice and snow. We tested that theory on Christmas Eve, 2004.

Proof? Well, it never snows in Victoria, and when it does it's never more than maybe a fraction of an inch at most. I've lived here 20 years, and never seen snow on the ground.

That Christmas Eve just over a year ago was pure magic! We awoke on Christmas morning to a full FOOT of snow on the ground!

Yeah, it was all melted in two days, but it was magical while it lasted. Here's that SAME yucca that's blooming now, with the foot of snow on it! 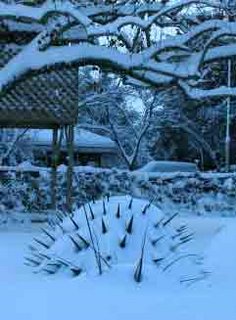 I live in the Appalachians that run through eastern Ohio. I live on a 123-acre farm. My hubby's grandmother used to live here and she planted yucca everywhere. Yes we get ice and snow, but it doesn't phaze the yucca. Ours, however, doesn't bloom until about May.

Holy cow! No snow then you get an entire foot in one night! Weird weather for that part of the States.

It's been raining cats and dogs here since about four o'clock yesterday. Spring rain has arrived and will stay for a while, which means the six inches of mud that goes with it is here too. :-(

As for my e-book, you better have a fire extinguisher handy if you read it, ROFL!

Who cares about golf and yuccas? I want to read the next installment of your story!!! I'm dyin' here.