...trying to wish everyone a Happy Mother’s Day.

In the process I frightened RobotJam, created a jealous outburst from Pointmeister, got a request for more sex pictures from my daughter Christina (really, Chrissy!!), had a mouthwatering mention of a picnic and Burgers from Kirsten, received a mention of a mystery gift from Cali to someone NOT her mother (although with Cali, the gift isn’t too much of a mystery,) a blog promo from Miss Cellania's new site, and a rave about my wonderful wife from Michelle! Don’t I have the best bunch of blog commenters you ever saw? Anyway, Carol has been back at it with the camera and the birds. Here’s a sample of her latest: 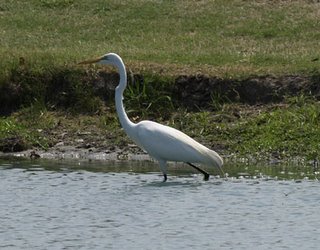 He's trying hard to get away from the camera. You know, some birds are like people -- they don't like having their picture taken. Then the thought struck him: "If she thinks I'm an ostrich, maybe she'll go away. I'll hide!" 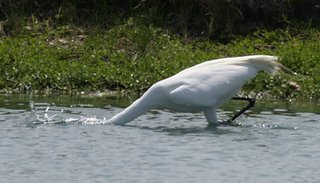 But Carol took his picture anyway. And after a bit he decided it was getting difficult to breathe so the struggled to regain his dignity and stalked off under a cypress tree. 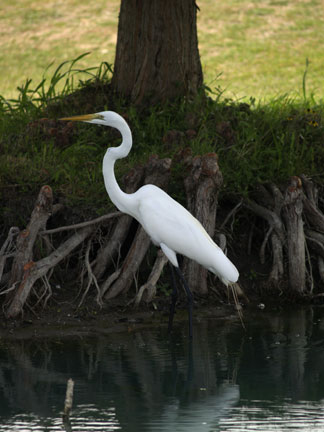 Later we came home to find the backyard birdbath all a-twitter with stories about a female grackle who had found some dry dogfood that was laced with wine! And the more she ate, the more tipsy she got. Carol waited, camera at the ready, and caught this shot of her bringing in her umpteeneth helping.

HiLARious sequence!
And that egret under the Cypress is like a postcard!

I agree with Candace...award-winning photo!

Carol now has a new profession - freelance photographer for the Romantic Ramblings Blog. Can we send her out on weekly assignments? With the great photographs she is capturing, I think she is thoroughly enjoying this new toy.

AHAAAAAAAAAA @ the expression on that bird's face (last pic in birdbath series). It really made me laugh out loud.

Agree with Michelle. We should have a 'Weekly Assignment for Carol' blogspot on here, where you list the places and we vote where you go/what photos are taken.

Yeah! Wouldn't that be cool!

You're so right, John. LOL.

For one, you do have some great commenters on your blog.

Secondly, it's not hard to guess with me at all!

I gave my mother something, too. Yet, I'm sure my "friend" found his gift a lot more interactive and pleasurable.

Can't go there with my mother. I reckon I should've had a chat with my stepfather a week before Mother's Day.

Anyhow...tell Carol the pics are great. And your captions are too funny. Perfect in correspondence with the pictures.

I hope the day is going well for you.

Until next time, luv.

You need to see Johnny Morris in action, his show was called Animal magic and it was one of my favourites about 20 years ago when I was a robo child.

He used to do the voices of what the animals were thinking and it was very entertaining. I was also in one episode pretending to be a penguin.

Here's another one for you, too, John -- the Daily Puppy has another bulldog up today.

Those are great photos of that egret.

That is so funny! The pictures are great!

The Daily Puppy? There's a daily puppy? I'm checkin' that one out. Mommy calls me "puppy" all the time, but I'm a Big Girl Terrier. I'll have to send her the link so she can tell the difference. Sigh. My work is never done around here.

Great photos.. and a funny sequence!