When Carol and I and our two girls moved here in 1986—20 years ago; it doesn’t seem possible!—the family in the house behind ours across the short chain-link fence consisted of Jerry, Ilona, and their three children.

Jerry was much older than his bride. He had been married before, and was starting a second family in his mid-to-late fifties. Ilona was 29.

I remember Bo, their one little girl born last after the two boys, running around the backyard as a toddler. She would splash in a little inflatable pool in the summer, when our girls were in their early teens swimming in our in-ground pool.

Years later Jerry retired from Union Carbide. But before too much time passed he was diagnosed with cancer and succumbed about 18 months later.

Then it was Ilona and the teen-age kids.

A few years later their older boy, terribly allergic to poison ivy, got into some of that vine somewhere and was taking large doses of antihistamine to keep from requiring admission to the hospital. He went to a party in that condition, had a few drinks (but not many, according to others there), came home and sat in a recliner while Ilona his mother went to bed.

The next morning she awoke to find him, still in the recliner, dead.

Then it was Ilona and her two remaining children; a brother and a sister. Those two, now young adults, moved out of the house. Her son married and has produced grandchildren. Bo became engaged late last year, but then we read in the local paper just a few months ago that her fiancé passed away. We never heard what caused his death.

And then, yesterday, Ilona died in the fire that completely destroyed her house.

Now there remains Bo and her brother.

Merely a brick shell and a slab; little more. 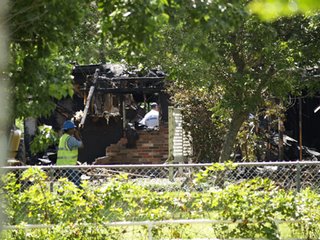 Throughout the day today the investigation by the state Fire Marshall continued, including the use of a dog to sniff out any possible accellerants. 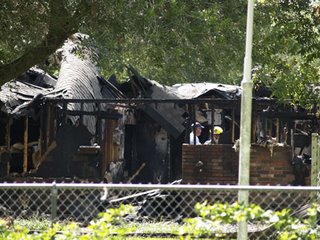 Clearly the heat had been intense. 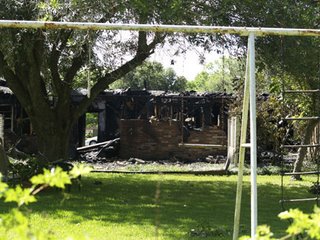 From my back yard we can see through the shell of the home to the street on the other side.

All that's left of lives and dreams and possessions.

How horrible, John. My mom's family survived a fire when she was a child and they lost everything but each other. It is terrible that there are so few of that family left now.

Yes it does make you think. What a horrible fate. That poor woman.

That's just horrific, how much bad luck can one family have ?

Bad luck is a mild term for these poor people.

Rob and Michelle: Yeah. At least one of my neighbors used the word "cursed" in describing the misfortunes of this family. How much of the dysfunction was brought on by their own life-choices, vs. things truly beyond their control? We'll never know.

But you do have to shake your head in amazement at the messes they've suffered through.