Candace said... What more do we want? Some news about the new book you're writing!Oh, and more pics by Carol.

The Duke replies... Okay, here you go. I’m working on a techno-thriller with an opening that would hook a dead man—an explosion and fire, people either dead or trapped inside, a hero who tries to go in but narrowly avoids being shot by an apparent sniper nearby, an escape in a careening pickup truck and a suspenseful close to the chapter.

The hero runs, chased by both the FBI and the drug lords. The Feds think he planted the bomb and tried to kill their agent; the drug lords think he knows too much and want him out of the way before he tells. The hero must avoid pursuit and stay alive long enough to convince both sides of the truth, while maneuvering them together for the ultimate showdown.

The love interest is a hip, street-smart Latina who just happens to be a federal agent.

Is that enough of a tease?

Oh, and as for Carol’s pics, here's one taken this morning. We have four yuccas in our back yard landscaped area (former swimming pool), and three of the four are blooming all at once. 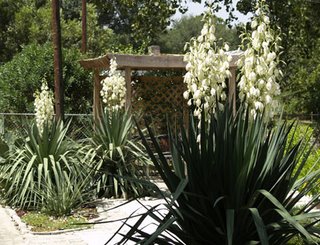 And since you asked for pics (plural), here's a quiz to see if you've been paying attention to the recent bird varieties we've shown you...

Name this species of Heron: 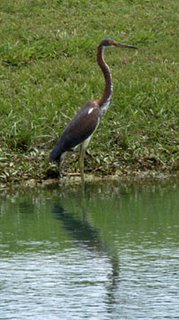 The answer is in the comments.

robotJAM said... Duke as you've offered ! Can you tell me how a man can wear a wig and not get laughed at ?

The Duke replies... Sure! There are a number of ways:

1. Only wear it in pitch darkness so no one can see it.
2. Dress in drag with nice clothes and sufficient makeup that those around you think you’re a woman.
3. Laugh first. Then they’re laughing WITH you, not at you.

Well, those were easy.

As I'm SURE you all know, that bird is a tri-colored heron. The key identifying feature would be the white legs. You knew that, right? Of course you did.

Tell them: My wife made me wear it because she asked me if she looked fat in her jeans and said for me to be honest.

Not so much a question but I am happy you are still writing. I have some time off so I will be finishing #2 with the hopes that it will be my first to be published. OR that I will have a rounder butt. I think the butt will be first, ha.

Ooh! Thanks, John - that sounds like a winner. How far along are you?

I knew that the color of the bird's legs had something to do with it, but couldn't remember what - does that count?

Karyn, Oh, conflict abounds. The hero's father has disowned him and he's seeking reconciliation. The drug lord is gay and ends up trying to date the hero, but the hero is trying to make it with the Latina chick but she doesn't speak English and his Spanish is bad. Actually I just made all of that up.

Candace, VERY good. I'll give you partial credit for that. More lessons to follow.